Signing off for a few days

From everything.  We are going offline for a few days or a week or thereabouts.  Maybe next week or so we'll be back.  I don't know.

Why?  Because we saw our hometown announce it is suspending all July 4th celebrations indefinitely.  Due, or course, to the threat that large gatherings in open spaces pose to thousands of Americans.  Our hometown does, however, fully support protesters calling out America as an evil and oppressive racist state filled to the brim with racists being racist.  The deaths of thousands of innocent Americans are worth the price for that one.  So, gather to celebrate America?  I'm afraid not.  Risk the lives of thousands to damn America?  Welcome aboard!

So, before this is eventually pulled (we have DVD copies, thank you), one last round from the top:


Meanwhile, a former classmate of mine just posted a tearful post on FB.  I knew her Dad died a couple weeks ago. He was a veteran.  But she was unable to attend his funeral and he was denied a military funeral with full honors because - you guessed it - social distancing.  They were allowed to wait in the cars, but only ten were able to attend.  Now, of course, hundreds if not thousands are protesting, and it looks like George Floyd's funeral (who I still know nothing about) will be the mass gathering event of the year!  Thousands infected and thousands dead!  But for the right reason this time!  Woohoo!

My boys said something interesting.  There was an interview with some young girl who was protesting.  She said she is part of the new rebellion.  My boys said that if your cause is backed by the overwhelming power  of America's multi-zillion dollar corporate structure, the vast majority of those in political power, the wealthiest and most powerful celebrities and cultural icons, the news media, almost all  religious traditions and religious leaders, the national press, and a growing number of law enforcement and military individuals and leaders, you are not part of a bold rebellion.  You are the establishment.  You are the power.

Think on that and what that power is now proclaiming and endorsing.  I've talked and posted on the spate of editorials and articles I saw last year calling on America to consider, if not fully embrace, it's inner Communism.  Not Socialism mind you, the actual C-Word.  Now I've just seen multiple posts and articles on a variety of sources saying that monuments of not only Confederates, but all Americans and all war memorials deserve to be defaced or removed.  Whose dream does that sound like?

And this almost overnight, fast on the heals of when the vast majority of Americans happily said they would sell all freedoms and cut all liberties to defeat Covid-19.  Except, of course, to prevent protests aimed at destroying the American experiment and casting down the United States.  Apparently thousands can happily die for that cause.  Likewise religious leaders - Catholic, Protestant, Orthodox and non-Christian - who only a week ago insisted we take it slow and easy when it comes to church stuff, are now out arm in arm with protesters by the thousands, risking lives for what is better - the casting down of America, rather than all that worship God and Sacraments rubbish.

I'm reminded of all the history books and biographies I've read over the years. There was one common trend you always saw when it came to those in Germany and Russia in the last century.  When asked how the respective citizens could allow such horrors as we saw from the Nazis and the Bolsheviks, the response was almost always the same:  It all happened so fast, they never saw it coming.

At the end of Obama's presidency, when the Left clearly tasted blood, I said I wondered if I would live to see us become a Communist inspired totalitarian state.  I now wonder if my youngest son will learn to drive before it happens.

So I'll be off social media, the Internet (for news or current topics) and away from any talk radio (not that I hear it much) or any news shows.  I'll seek weather and traffic other ways. I'll hunker down, spend time with the family, and pray, pray, pray.  If it's anything, it will be hobbies, cooking sites, static religious sites, or other things. And I might even post about an all important game!  When I come back, I'll see if I am any more optimistic.  At least I will have had a bit of a break from the obvious. 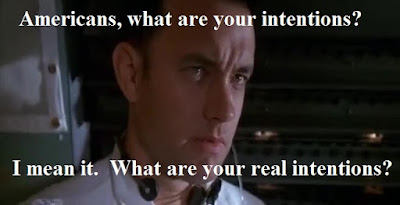 Posted by David Griffey at 4:30 PM