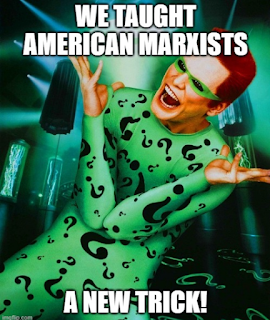 I don't mind saying American Marxists since, well, it's more or less out of the bag.  I mean, when you see a growing number of people moving past mere Socialism and going full-blown for Communism, I think it's fair to call a spade a spade, or at least meet them in the middle and say Marxist.

So what was this new trick?  Well, since post-Reagan, the Marxists ensconced in their news rooms and university halls and behind the cameras in Hollywood have known the best way to cow Republicans was to attack them.  Set the rules, seize the initiative.  If they question anything Left, they're Hitler.  And from GHW Bush to 2016, most more or less showed that tactic was one that would work like a charm.

Then came Trump.  Trump was a flaming leftist for most of his life, and a darling of the liberal establishment.  Oh, he was bit of a bad boy 'love to hate' fellow, but his money and his fame made him the one any good liberal wanted to party with like it was 1999.  Until, of course, he committed the unforgivable sin of putting an (R) in front of his name.

From there, the Marxists assumed the usual would work.  Sure, they hoisted Trump in the 2016 primaries in order to wreck the GOP field of candidates.  But once that was finished, they assumed they could go after Trump the way they had every GOP candidate since 1986:  Either accuse him of being Hitler, dig up a scandal, or a combination of both.

And what did they get for their efforts?  A climatic end to three years of the most sustained coalition against a sitting president in our history, with Trump emerging with higher poll numbers than ever before.  I'll leave others to figure out how this could happen, but happen it did.  And all of this while the field of Democratic contenders was being engulfed in flames of idiocy, incompetence, hubris, elitism, and one spinning love yarns to communist dictators.  Trump emerges from being impeached on top of the polls?  The Democratic candidates are imploding?  What to do?  Attack Trump some more?

And that must be when it hit them. If you want to take out Trump, you don't attack Trump.  Trump just fires back at you with both barrels.  Trump, rightly or wrongly, subscribes to the idea of 'a nuclear missile for an eye.'  Because there is enough falling apart in our world and the Left, largely holding dominance in our country and much of the West for decades, was having a tough time always blaming everyone else, a new strategy had to emerge.

That strategy?  Attack America.  Do whatever it takes to create the worst imaginable crises or catastrophes it can, encourage Americans to hate each other and turn on each other.  Get the government to wreck the economy.  Get people to fear WWIII, billions dead from a global pandemic, the local police, your next door neighbor, whatever.  There is no amount of body bags, burned buildings, dead business owners, murdered children that aren't worth it when they know they can put 100% of the blame on Trump since they're all more or less on the same page, and they set the narrative.

Essentially, if Trump is standing there between you and the hostages and every shot fired at Trump has bounced off, then start shooting the hostages.  And then insist it isn't anyone's fault but Trump's for not defending the hostages.

That seems to have done the trick.  Trump is good at defending himself, even his supporters.  Defending the entire nation against relentless attacks forged upon lies and falsehoods?  Not so much. He's seemed bewildered, confused, inconsistent and, for the first time ever, helpless.  As politicians  move to abolish police forces, Trump responds to no avail.  As church leaders gather to increase Covid-19 cases to protests America as a Nazi state, Trump just shows up and hopes they'll like him.  As more and more of our leaders support the protests and demonstrations that left dozens killed or injured, and many more with their livelihoods destroyed, Trump appeared to know nothing other than send in the army - and then recall it when the heat got turned on, while his generals and servicemen in general turn on him.

This has left many of his most stalwart supporters scratching their heads.  It has buttressed Trump's opposition, who will support anything evil and false and destructive under normal conditions, with increasing confidence that this new approach is working.  And it's left that broad area in-between with the notion of a collapsing nation that is falling apart due to an already suspect president whose incompetence is finally beginning to show.

So from now on, I'll wager that if the Marxists experience a political setback, they may initially try the old attack and destroy method against the victor in question.  But soon otherwise, if that doesn't work, they will turn their guns on America, or anyone in the world for that matter, in the hopes that whatever death and destruction emerges, they can then blame the one who dared deny them of their rightful place on the top of the hill.
Posted by David Griffey at 7:30 AM

Email ThisBlogThis!Share to TwitterShare to FacebookShare to Pinterest
Labels: Anti-Americanism, Left and a New Communism, The Decline and Fall of the American Dream