Like Sears before it, Penney's (as we always called it) is near it's last, dying breath.  I'm sure there are many reasons for this.  Things change.  Markets change.  In both cases, poor decisions and, quite frankly, lousy service and sales finally caught up with them.

Growing up, JC Penney, Sears and Montgomery Ward were the three goto stores I knew.  We went to some others.  O'Neils employed an aunt who was especially close to my Mom.  I believe that must have been centered around Akron, because I always had the impression my aunt was near to the corporate offices.  There were others.  I remember Service Merchandise, with its snazzy conveyor belt that brought the items you just ordered out to be handed to you.  Neat stuff that.  Sort of a stone age Amazon.com.

But it was Penney's and Sears that dominated.  Sears was my Dad's default when it came to all things hardware, automotive and household appliances.  He was a Craftsman man all the way.  JC Penney was the other one for whatever remained.  And on rare occasions, we went to Monkey Ward since there was only one near us, and it was almost an hour away.

These three also contributed to that annual ritual known as The Christmas Wishbook.  Technically I think the term Wishbook was copyrighted by Sears.  But we called all the Christmas catalogs that name.  We waited, and waited, and waited to get our hands on those, and pour over the color photos of all those juicy, savory toys and games.  They usually came around August or September, and were a crucial part in adding to the joy of the season and the anticipation gearing up for Christmas.

My interest in the Wishbooks didn't take off until I became enamored with a line of toys called The Micronauts, around 1978.  I would spend hours on the couch, ogling those pictures of all the expanded toy line for that brand.  I sometimes noticed things like Star Wars toys as well, though, oddly enough, I was never into the Star Wars toys that much.

I think I kept on caring about the Wishbooks until late middle or early high school.  The last year I remember caring was because I wanted to order a little diorama model of The Battle of Hoth in 1981 (the actual page from the catalog here, the wonder of the Internet!): 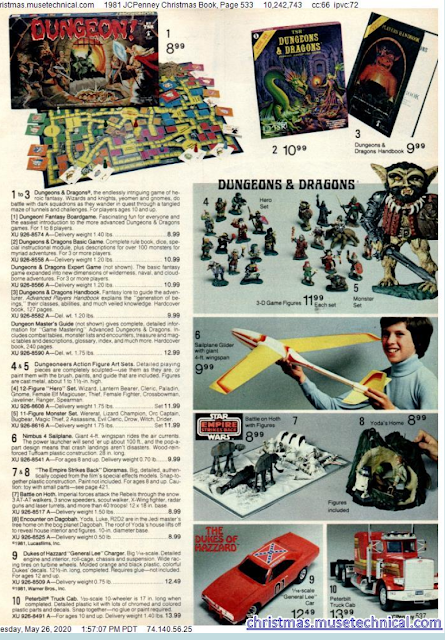 I saved my meager earnings (I was just coming out of 8th Grade) and finally had my Mom order it for me (today worth about 25.00).  I was disappointed.  The thing was only a foot by a foot and a half.  You could barely see some of the smaller components.  I realize it gave the dimensions on the page, but dumb kid that I was, it never clicked.  So I had my Mom take it back.  The only thing I ever personally ordered from a Wishbook and I sent it back!

Oh well.  By then I must admit my interests were moving onto other things.  It's worth noting that on the same page as the Hoth model was the Dungeons and Dragons section, which was all the rage and fad at that point.  Nonetheless, being in a small country village, I hadn't heard of it before.  I can still remember looking at it puzzled about how one can have a game with no game board or game box visible.  And what in the world was a bugbear?

Anyway, it's a reminder that things of this world are fleeting.  I would have assumed Sears and JC Penney would remain in our country as long as Mount Rushmore.  But there it is.  I also would have imagined statues of Christopher Columbus would be around for years to come.  It reminds us that nothing in this country or this world is permanent.  Heck, from the looks of it, you could be forgiven for assuming our country won't be close behind these esteemed retailers in terms of years remaining.  You never know.

So sayonara Penney's.  You join Sears and a growing number of childhood memories that will have to remain memories, since there won't be anything else left to see.
Posted by David Griffey at 5:30 AM