When you align with dark powers

Your arguments are going to sound dark, very dark. 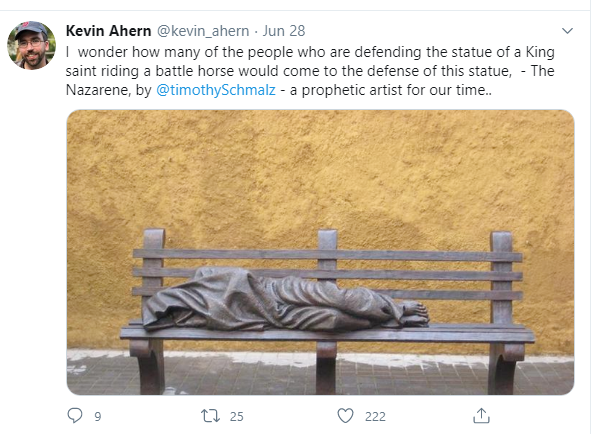 Apparently that was on Mark Shea's twitter feed.  But the individual is someone I don't know. Note, though, the preemptive judgmentalism, the assumption that if people defending the statue of St. Louis heard this statue was under attack, they wouldn't care.

How does he know?  If they knew it was supposed to be Jesus, they just might. Heck, if they didn't and heard there was a mob of rioters and iconoclasts and zealots bent on destroying it, they might rise to the occasion and protect it on general principle.  I could see them doing so.

Just why the fellow seems he has to point out St. Louis was on a horse, I don't know.  That would be ... I have no clue.  He seems to feel it's important.

But point is, notice the assumption, the preemptive judgement, the accusation over some hypothetical that isn't happening and likely won't happen.  Personally I had no idea that was supposed to be Jesus.  But even if it wasn't, I wouldn't support it being destroyed.  That's me.  That's most I know who are opposing this violence, destruction, threats, vandalism and killing in the name of the Marxist revolt.

I'll assume - since assumptions are all the rage - none of those are as important to this individual, or Mark Shea, as scoring points against anyone trying to defend the heritage of the Christian West and avoid the modern assumption that we define humans of the past by their sins, their skin color, or their national origins.  That does seem patently clear.

BTW, I wonder if Mr. Ahern and Mark have commented on this: 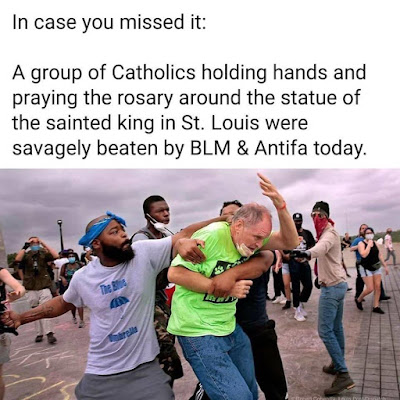 Since they clearly don't care about the statue of St. Louis coming down, even if he is on a horse.

Again, this is now clearly a revolt of violence, hatred, bigotry, destruction and death.  Marxist inspired, totalitarianism, bigotry and oppression as the goals.  Those who for whatever reason defend and deflect and join the elitist classes who are clearly happy with our country going in this direction, are now the enemies of all that is good, virtuous, holy and right.  Mark them for what they are.  And remember.
Posted by David Griffey at 12:58 PM

Email ThisBlogThis!Share to TwitterShare to FacebookShare to Pinterest
Labels: Anti-Americanism, Christian Persecution, Resist the Evil, The evil the Left does