The Feast of Corpus Christi

Not the one in Texas.  Though that's always a nice reminder, along with other little urban names such as San Diego, San Francisco, and San Antonio, that there was actually a dynamic Catholic presence in the New World long before the rightly celebrated Plymouth Puritans showed up to display their own awesomeness.  No, this is the Feast of the Body and Blood of Jesus Christ.  As understood by Catholics, the actual Body of Christ in the bread and the blood of Christ in the wine. 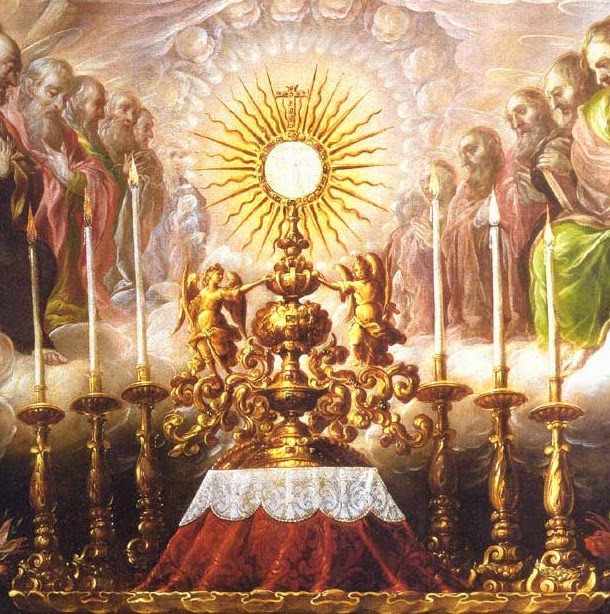 Sounds silly, right?  Well, no more silly than the son of an obscure peasant woman being executed by Rome in order to redeem the spiritual well being of all humanity.  In fact, this was also one of those things that I, former non-Sacramental minister, came full force into contact with as I reflected on our own Lord's Supper celebration in the heyday of my Protestant years.

It's odd that the famous John 6 discourse comes in the last of the Gospels. Think on that.  Unless you're really a radical progressive post-modern scholar, you accept that John's was the last Gospel penned.  Probably around the last part of the first century.  That's about 60-70 years from the events of Christ's Passion.  Meaning the Church has been around for about six decades or so (about as long ago as the 1950s are to us).

By now, the earliest Gospels were in circulation.  Within a century the four would all be accepted by the early Church as part of the scriptural witness of the New Covenant.  But John was last.  And almost all scholars know that some form of pre-gnostic Gnosticism was being addressed in the heavy handed 'Word became Flesh' emphasis of John's writings.  Unlike the Synoptic Gospels, John is focused on fleshing out (literally) the story of Jesus, especially as some must already have been suggesting, ala later Gnosticism, that Jesus could not have actually been physical. Matter being evil in itself.

Enter John.  The Word became Flesh, and dwelt among us.  It's noteworthy that it's John's Gospel that bookends Jesus' earthly ministry with accounts of Mary.  But that's for another post.  In this one, instead of hearing the tale of the Last Supper, we hear something else.  I remember being taught that John 'didn't have a Last Supper account.'  One of the things that blew my mind was hearing Steve Ray say 'yes it did, it's in John's Gospel, chapter 6.'

Just like the synoptic accounts of Jesus birth being repackaged to be the Divine Logos made Flesh, so here we have the Eucharistic meal not in a setting with Jesus and the Disciples as it happened, but with Jesus unpacking the meaning.

When Jesus said to his Disciples 'take and eat, for this is my Body', what in the world did He mean?  When Paul repeats those words in his letter to the Corinthians, what was he talking about?  Well John, written decades later, explains.  He means this:


I am the bread of life.  Your fathers did eat manna in the desert, and are dead. This is the bread which cometh down from heaven; that if any man eat of it, he may not die.  I am the living bread which came down from heaven.  If any man eat of this bread, he shall live for ever; and the bread that I will give, is my flesh, for the life of the world.  The Jews therefore strove among themselves, saying: How can this man give us his flesh to eat?   Then Jesus said to them: Amen, amen I say unto you: Except you eat the flesh of the Son of man, and drink his blood, you shall not have life in you.

How about that?  Yes, I'm aware that Protestants read this as a metaphorical saying, or using imagery to point to his overall Sacrificial mission, or something similar (depending on the Protestant tradition).  That's fine as far as it goes.  But there's no textual support for such a reading in the Greek, especially when set against the classic Corinthian and Synoptic quotes of Jesus pointing to the bread and wine and declaring them His Body and His Blood.  Something that the author of John would have been well aware of by the end of the first century.  That, plus the lack of a textual reason to reduce it to imagery, is a problem.  We were even taught that in Greek class.  But for the theological underpinning of clear Evangelical thought, there wouldn't be a reason to see this as anything other than meaning what the Historic Faith says it means.

And more than that, considering John's emphasis on 'it is too really flesh, real, there', it isn't hard to imagine this being an unpacked explanation of the Eucharistic meal being celebrated by that point in time.  When Christians decades later were celebrating it, some questioning the bodily presence of Christ on earth would logically question anything bodily present in a piece of bread.  And John's answer?  Not that 'well yeah, duh, of course he meant it was representative of something.'  No, just like that Word coming to tabernacle with us, so Jesus makes it clear His Body is the Bread, and we must eat it, His Flesh, to have Life in us (just like the Synoptic narratives present His statements).

I know, anything can be argued away.  And yet, like many things that dragged me kicking and screaming into the Catholic Church, I had to ask if it was the simplest thing to do, or if it was something I merely wanted to do because I didn't want to be Catholic.

Anyway, today's the Feast.  Here is the always enjoyable Fish Easters unpacking some traditional customs for this day.  We had a procession, but illness and timing brought us home (though my middle two stayed to help with the procession).  We'll see what else we can do.  There are more things to unpack about this central teaching of the Faith.  But thought I'd toss out a few thoughts off the top while waiting to pick up the boys.
Posted by David Griffey at 2:34 PM

Email ThisBlogThis!Share to TwitterShare to FacebookShare to Pinterest
Labels: Catholic, Why I Am Catholic