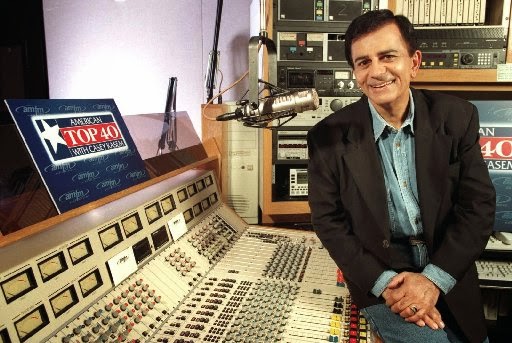 And keep reaching for the stars.  Casey Kasem has died.  Mr. Kasem was part of the cultural soup that I swam about in during my formative years.  By high school, he was part of that backdrop that I just assumed would always be there.  Before iPads and iTunes, America's Top 40 was how you heard the latest.  There were other genres I preferred than just Top 40, but I was always keen on keeping up with the latest.

It was a bonus to find out that Casey was none other than the voice for that tripping hipster of the Scooby Doo gang, Shaggy.  And he also had specials and came in and out of various pop culture productions, such as a brief stint as himself in 1984's Ghostbusters.

I especially remember his annual Top 10 Christmas Songs special.  They were typically the same songs, and may have actually been the same show replayed each year.  I like his telling of the classic O Holy Night the most.  He told of a break in the Franco-Prussian war, in which one soldier on one side, then another on the other side, and soon all of the soldiers stopped the fighting to sing this song.  Eventually, Kasem narrated, they would return to the fighting, and many would die.  But for a moment the light of Christ came through that horror for a brief glimpse of peace.  As only he could deliver such a tale.

Thanks for the fond memories.  Thanks for being a decent spirit in an age when culture was becoming increasingly vulgar and crass (he famously refused to speak the title of George Michael's I Want Your Sex).  And just thanks for being part of the memories of my youth.  May the perpetual Light shine upon you.
Posted by David Griffey at 8:41 AM