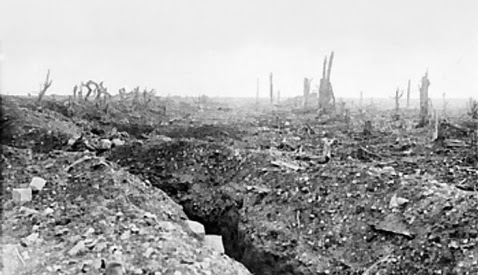 A day to remember, reflect, and pray.  To remember the day that started it all.   Not a day to look back at those losers  who weren't as hip as we are.  Any other generation might be able to make such a judgment, but not ours.  I used to tell my boys that WWI began because a Serbian nationalist assassinated the Archduke of Austria, so naturally Germany invaded France.  It was an attempt at a humorous way of conveying the context out of which World War I emerged. The tangled web of treaties and alliances and family squabbles had finally hit the boiling point, and a generation that was busy patting itself on the back for its awesomeness and hip maturity was about to get a gruesome wake up call.  We're Marching To Zion, so the old hymn went.  We were marching there.  No need to wait for the Second Coming, we were busy doing what God Himself couldn't do.  The illusion began to fade in the icy waters of the North Atlantic a couple years earlier.  Now it was about to be demolished, and all starting with a disillusioned and disturbed young man in a far away country that few probably had heard about in the States.  Within four years, tens of millions would be dead and millions more lives forever changed.

As we are in our own era of repeating historical mistakes because of arrogance, apathy and ignorance, may we use this day not to condemn those who went before, but to accuse ourselves as we stumble blindly ahead, ignoring the signs, and setting up the foundation for future atrocities that may make those of the last century pale in comparison.

In Flanders fields the poppies blow      Between the crosses, row on row,   That mark our place; and in the sky   The larks, still bravely singing, flyScarce heard amid the guns below.We are the Dead. Short days agoWe lived, felt dawn, saw sunset glow,   Loved and were loved, and now we lie         In Flanders fields.Take up our quarrel with the foe:To you from failing hands we throw   The torch; be yours to hold it high.   If ye break faith with us who dieWe shall not sleep, though poppies grow         In Flanders fields.
Posted by David Griffey at 6:56 PM