Blessed are the poor Catholics 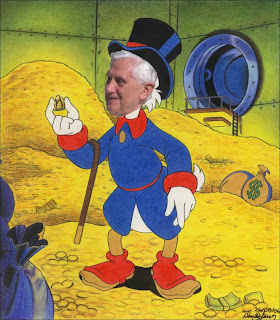 I just thought I'd throw that out there as a reminder to the Catholic Church that not everyone has the money it takes to be a devoted Catholic.  Next week, my boys' youth group is going on a retreat that my boys are not going on.  Why?  Because we couldn't afford it.  I know, I know.  They would give me the money if I asked.  And up to now, in past times I have done just that.  Though there seems to be a break down on paying for PSR, but that's a different issue.

As it is, their youth group is going on retreat   A year ago, some youth went on a trip to Italy.  Know what? My boys didn't.  Why?  We can't afford it, that's why.  Heck, there's a decent chance that if I were to have kept my standard of living I had before entering the Church, we still couldn't have afforded it.  And no, there were no offers to pay for those without the funds.

You know what we did in Protestant circles?  First, we made sure that anything we did was open to everyone.  Not just the well-to-do.  Second, when it involved funds or expenses, we raised the money.  The kids had to wash cars, work at people's houses, raise the money themselves.  All of them equally.  Then the congregation would find a way to match, or through donations pay, a certain balance.  That way no kid was set in the 'you're too poor so here's the money' category, as opposed to those kids with rich parents who don't need the help.  I know, it is likely behind the scenes.  But still, I know churches.  People talk.  Things get around.  And it's enough to remind the kids by virtue of what is needed anyway.

This doesn't even include the uber-trips like Italy or the Holy Land that just don't have options.  Let the adults do that, but don't do it for the kids.  Don't separate the kids into sheep with money and goats without before they're even out of high school.

Do I seem a bit pissed off, maybe resentful and jealous?  Perhaps.  Maybe I am.  But it's not jealousy toward the people with the money.  That's fine and dandy.  I'm not one who thinks large bank accounts leadeth unto perdition. It's the fact that it's my Church doing the categorizing.  It's being the standard bearer of 'blessed are the poor, for they shall stand over there' that's the problem.  The Catholic Church has a long, age old reputation for wallowing in wealth while the poor of the world grovel in the mud and dirt.  Remember what I've said about avoiding stereotypes?

If our parishes want to go to wonderful events for our youth  that's great!  Just find a way to make sure all can go together, without the need to stand up and say 'I need help since my family isn't as rich as yours.'  And if the answer is 'but Dave, there's no shame in being poor', let me remind the Church it shouldn't be the Church's youth policies and programs that force the confession in the first place.  Programs for adults?  Sure, why not.  But kids shouldn't be shown by the Church that with money comes soother paths to the child born in a manger.
Posted by David Griffey at 11:54 AM