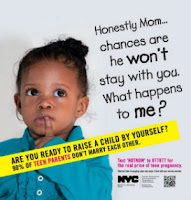 Mayor Bloomberg, a man who acts as though he wishes he could control everything, continues to amaze.  Catholics as well as Planned Parenthood have united to condemn his recent anti-teen pregnancy ads.  The reasons for the opposition are, of course, different.  Planned Parenthood believes the emphasis should be on how to have more sex with less consequences up front.  Catholics believe it should be on something like 'don't have sex until marriage'.  Both seem to draw a certain 'ick' factor from the idea that the real problem is you'll be stuck with a rotten snot-nose brat who will indefinitely interfere with the cocktail hour.  Perhaps Mr. Bloomberg watches too much Bill Maher, who  is famous for his desire to abort snot nose brats who interfere with the cocktail hour.  But even in our hedonistic post-Christian world, all but the moist radical 'genocide for orgasms' cynics will tend to recoil at the idea that children are not precious, but in fact are a disease needing cured.  We may say it.  But we don't like to see it.
Posted by David Griffey at 11:25 AM