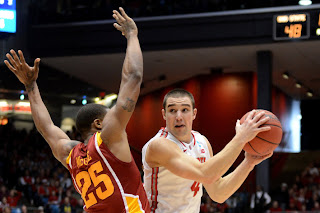 And Ohio State heads to the sweet sixteen and Iowa State made it a game to remember.  In one of the most awesome plays I've seen in years, Aaron Craft controlled the ball until the last second, tied with Iowa State, then shot: in the air, and swoosh!  Three points.  This was following a string of blunders and bad shots from the usually solid Craft.  While champions are not always successful, they always come back and try again.  And that he did.  Tied with less than 30 seconds left, Craft had already turned the tide by drawing a brilliant foul.  True, there were some bad calls against both sides, but this was a case where Craft knew every inch of the court.  OSU was down under the basket, Craft got the ball, and Craft stood there, and stood there, and stood there while the seconds ticked away and we imagined it was going to be an overtime game.  And then, with a second left, he bluffed the Iowa guard, stepped up to within an inch of the three point line and nailed it.  Talk about ice water in his veins.  The whole team was there doing its thing, and Craft showed once again that he is the heart and soul oft he team, even if he's not its star player.  But when it needed him, he was there.

Thad Matta and the Buckeyes are doing great this year, but Craft is someone that you just know is going to succeed in life no matter what.  As I said before, he came to speak to our youth at our parish, and my boys were quite taken with him.  Now I can see why.  Well done Bucks, well done Mr. Matta, and California here we come!

P.S.  If you scroll down the page on the link, you can see The Shot as it happened.
Posted by David Griffey at 2:55 PM