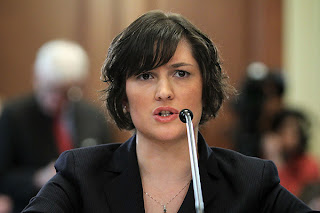 Just checking in to see if everyone has been able to get their lives back together after the media outrage from her statements comparing tax supported birth control and leukemia.  We know how those media outrage cycles go.  Sometimes it can almost wear you out when the media latches onto something, like a politician comparing homosexuality to a disorder or suggesting that some rapes may not be rapes at all.  Whew.  No doubt our heads are all still spinning from the just and reasonable outrage that the media displayed in their coverage of this out of the ballpark half loony/half evil idea that one's sex life is as important as a leukemia patient fighting for life.  What's that?  No you say?  You're trying to convince me that there was no media outrage and daily round table discussions expressing unified outrage?  Really?  That would almost suggest that the media is biased.  Heck, it might almost suggest that most in our modern media are about the post-Christian notion that drugs, sex, and bathroom humor are the only rights we have, that everything else is unimportant, and therefore unworthy of being protected as a right.  I think you go too far.
Posted by David Griffey at 6:30 PM