On Pope Francis I 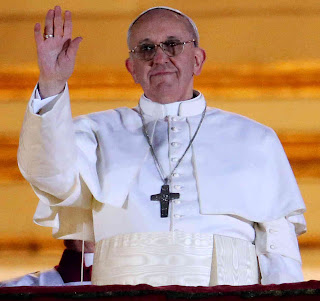 Been so busy, haven't really had much time to post my thoughts on our new Pope.  We started our journey into the Church back in the waning days of Pope John Paul II's time.  In fact, the week I scheduled a luncheon meeting with a priest I knew in our ecumenical ministry association to talk about becoming Catholic was the very week that PJPII passed away.  Pope Benedict XVI was already settled in when we officially were brought into the Church on Easter, 2006.

So as a Catholic, Pope Benedict is the only Pope I've known.  I have my opinions about him.  Not harsh ones.  I think he was a decent enough fellow who tried his best.  MHO was that he was a book guy, an academic, a fellow better suited to sitting in a small room with a window and a stack of books, making sure things were in order from behind the scenes.

True, he suffered from the Earle Bruce syndrome   Earle Bruce?  He was the football coach who replaced Woody Hayes at Ohio State back in the late 70s.  Hayes was one of the iconic figures in the history of college sports.  Charismatic, a violent temper, over the top theatrics, a keen mind and passion for the academic well-being of his students at a time when that wasn't necessarily vogue, and a flare for the controversial  made him much loved and much hated, but well known.  He also won games.

When he was fired for punching a player, Earle Bruce took over.  Bruce was not Hayes.  Quieter, a bit stocky in appearance, he replaced Haye's trademark OSU baseball cap and short sleeves with a fedora and suit.  He was a good coach.  In fact, he could have been great.  And  yet, he wasn't Hayes.  He just wasn't Hayes.  And that did him in.  By 1987, he was gone. Just like George HW Bush wasn't Reagan.  Benedict just wasn't John Paul II.

He seemed, at times, again IMHO, to be in over his head.  He really wanted to convey beautiful truths, but seemed unable to do so without something going haywire.  Scandals began to emerge, and the world became increasingly impatient with the apparent lack of decisive steps to remedy the years of abuse and scandal that have defined the modern Church.  Internally there appeared to be issues.  And in the end, well, he just wasn't John Paul II, Superstar.

When he made the historical decision to resign his post, to be honest, I wasn't that surprised.  Things were not getting any better, that's for sure.  If there were signs of hope in some cases, in others there were clearly indicators that the wheels needed some grease.

And so now we have Francis I.  The reason I spent most of this post about Francis I talking instead about Benedict XVI, or John Paul II, or Woody Hayes and Earle Bruce, is because I don't know that much about our new Pope.  Heck, I don't know anything at all.  I think - think mind you - that I've heard some stories that referenced him in recent years.  It seems to ring a bell that he stood against the push for gay marriage in Argentina.  But that's about it.

Since he comes from a place not in the comfortable West, not in a culture where ethical debates are often as academic as they are urgent, I'm betting there will be some different spins on some old assumptions.  Since he's from a real 'gun-in-the-face' background, I'm wagering that some Catholics may be hard put to keep where they've been and where we'll go.  But I could be wrong. We'll just have to see.  I will give him kudos for picking St. Francis, my own patron saint who was instrumental for my own Catholic conversion.  Again, I'm not about to say 'I know nothing of this new Pope, but anyone who says thus or this is stupid or evil or doesn't know about Jesus.'  For now, I'm content with sitting back and letting things unfold.
Posted by David Griffey at 10:53 AM