Gets all the press.  I'm OK with that.  Ever since my parents discovered my lineage some ages ago, I've been rather taken by my Irish roots.  I always knew that we were part Irish, part Welsh, a little German and a smattering of other European heritage.  Thanks to the amorous choices of my great grandfather on my Dad's paternal side, I also have American Indian.  My wife, likewise, is also heavily favored on the Irish side, though she has a greater strain of American Indian and could have qualified as actual Native American from a legal perspective in terms of college grants and similar perks, if she had not already received a full ride.

But in it all, my Irish side is best known to me.  Some years ago, my Mom and Dad were traveling back to my Dad's birthplace in the hills and mountains of West Virginia.  Dad was born way out in the boons, in a town that no longer exists.  They were asking folks where certain landmarks might be when they stumbled across a woman who was working on a PhD.  Part of her work was tracing, of all things, the genealogy of my Dad's maternal family.  Apparently the woman herself was related, as most in that region might be.

She produced the fruits of her labor, a massive book hundreds of pages long detailing everyone linked to the original family who came across the ocean back in the waning days of the eighteenth century.  Through that side - the Mollohans - we actually hail from County Sligo in Ireland: 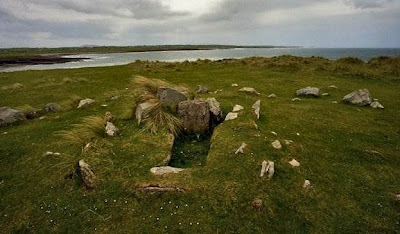 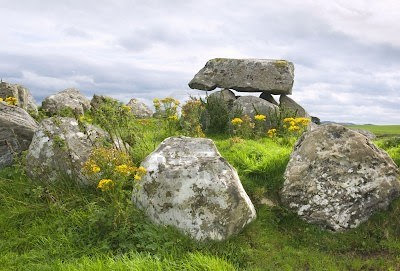 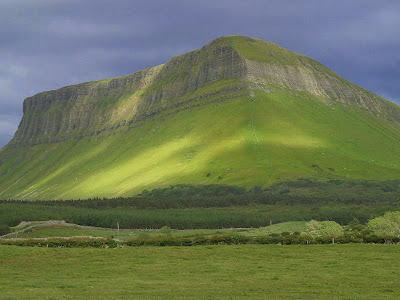 Ah, now that's a place that screams Emerald Isle.  And talk about ancient sites to stimulate this old historian's imagination.  And for those who golf, apparently it's one of the premier golfing locations in the British Isles.  But I am as good as golf as I am at spitting, so I'm more taken by the history, the lush landscapes, and the heritage.

Fact is, the son of the first fellow to come over here was killed by a bear. Figures.  Talk about setting a precedent.  Others did some amazing things, some not so amazing, and quite frankly, I'm rather surprised at how my line even got here, given the infant morality, the war casualties,  and the general death and suffering so many of them seemed to experience.

I've done some research on my Mom's side, and my wife has as well. But the most clear picture is from my Mollohan side, whose most distant descendants actually came from Scotland during a displacement ordered by the crown almost two centuries earlier.

Because of this, I'm rather fond of St. Patrick.  He's my 12 year old's patron saint.  He also gives us a great excuse to feast and play in the otherwise dreary month of March.  So it's tipping the old Guinness today.  Maybe a Harp.  Irish meat pies and potato and leek soup, sauteed turnips, some truly awesome homemade Irish candy, and of course homemade soda bread.

We'll learn about St. Patrick, explore Irish history and folklore, listen to some authentic Irish music, and basically chill.  Owing to Ohio State's basketball prowess this year, we'll also pause to see if they can keep their winning streak alive.  Special note: defensive aficionado and scholar athlete Aaron Craft, one of the defensive stars of college basketball, came to speak at to parish youth some months ago.  My two oldest were mightily impressed.

Anyway, that's the news.  I'll be back with a few updates and posts in the not too distant, especially to look at a couple emails I got to kick things around.  Till then:

May the road rise up to meet you.
May the wind always be at your back.
May the sun shine warm upon your face,
and rains fall soft upon your fields.
And until we meet again,
May God hold you in the palm of His hand.

Posted by David Griffey at 3:55 PM