The post was the typical 'religion is stupid and/or evil' narrative supporter.  In this case the atheists' favorite 'religion is obviously so wrong and dumb why do people believe it' assumption.  It was based on this cartoon: 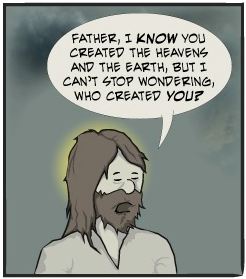 Yet the good atheist, trapped in a small box of narrow thinking of his own making, proudly displays this as the coup de grace of theological debate.  Can any religious believer (in this as in most cases, the Christian) do anything but whither under the assault of this awesome breakthrough in atheist apologetics?

But note the assumption: God, like anything, is subject to the laws of the material universe, the only reality that atheists will allow in debate.  And then a reader posts this:


Classic atheist error: Since atheism is obviously true, God must conform to the laws of a universe in which nothing can be God in order to be proven. One reason why falling into the trap of 'prove' God will get you nowhere with an atheist.

BAM!  Wonderful.  That was me giving a high five to the fellow.  I noticed that the thread not only came to a complete halt, but the only response was 'oh yeah, well, religious people aren't rational, yeah man, they aren't'  Heh.  It was good, and it deftly exposed the great atheist fallacy: when they say 'prove God', what they mean is begin with the assumption that God doesn't exist, that all is matter, and that everything must be proven on that basis.  Now prove God.'   I did this post just to copy the statement.  I will refer to it often whenever another atheist says 'you have to prove God.'  From now on, I'll respond only if they accept the existence of a non-material reality first.
Posted by David Griffey at 12:25 PM