So that is why

I noted a week or so ago the sudden vendetta against Bishop Barron and Word on Fire ministry.  Now we know: 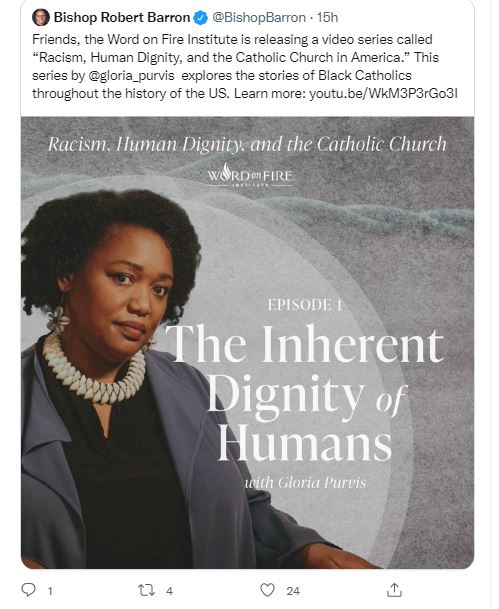 I've noticed that, for all the chest pounding and warnings that you don't want to tick off the side of the issue that owns all the guns, there are few who can withstand the Left's assaults.

Of course releasing this video series may have been pre-planned before everything erupted against Bishop Barron.  But I've seen people going after him and WoF for many moons now.  And I don't know when this was planned or produced.

Ms. Purvis is a Catholic who drinks deeply from the well of BLM.  I don't know which parts of BLM she rejects, but she accepts the premise: an inherently racist nation with white racist Americans in racist Catholic Churches who should be ashamed of themselves because white means being racist. In short, she represents that - hopefully - small but likely growing number of blacks in America who are told to stop with the forgiveness and reconciliation rubbish and get that pound of flesh.

I don't know if WoF wouldn't have published her series or not.  After all, woke/cancel,BLM,#MeToo are all ingredients in the same recipe. And Bishop Barron famously went after woke (leftwing censorship).  Or perhaps WoF had every intention of publishing this in order to give voice to different sides of the debate.  Something Bishop Barron's tendencies make believable.

In any event, I saw that this was met with great cheers by some who had targeted WoF and Bishop Barron recently.  It's not hard to imagine that, like Chik fil A or the Boy Scouts or anything the Left targets, it could be the result of inevitable surrender and retreat.  Those are outcomes that, quite frankly, mark the typical results of the conflict between the traditional values of the Christian world and the new values of the secular pagan world.

Email ThisBlogThis!Share to TwitterShare to FacebookShare to Pinterest
Labels: Catholic Church and the Left, The Leftist Juggernaut, The New Racism and the Catholic Left