In response to my post about Fr. Martin's outdated Vaccine narratives and Deacon Greydanus resisting the call to trash the unvaccinated when they die, I was sent the image below. View at your own risk.

Truth be told, I had to wipe my eyes and look twice.  It really is Mark Shea unzipping, whipping it out and pissing on the memory of Meat Loaf on the day he died.  Once again, like Fr. Martin, there must be a hope that by screaming at the top of their lungs they can silence the obvious shift in results versus the initial promises of the Vaccine.

I didn't have a chance to write my thoughts about Meat Loaf, who always seemed to be around since I was a kid.  I was going to mention a hilarious moment in our family when Meat Loaf's Two Out of Three Ain't Bad was playing on the radio while we were watching a musical number in The Music Man with the sound down.  And how, with no effort, the music aligned perfectly with the action on the screen, even ending as the scene faded to a commercial. We still laugh at that.  That will always be one of those fun 'family memories.'

But no.  New Prolife Catholic Mark Shea plows through the crowd in order to spread those mighty cheeks and defecate on Meat Loaf's barely cold body, in a way he once blasted Conservatives for doing when it comes to making politics out of someone's death.

But then the strength of the modern Left is forever announcing that you have heard liberals say X is evil, but the Left now rejoices in X because it's convenient.  I'll say no more.  I'll let Mark's own heartless and hypocritical rhetoric speak for itself: 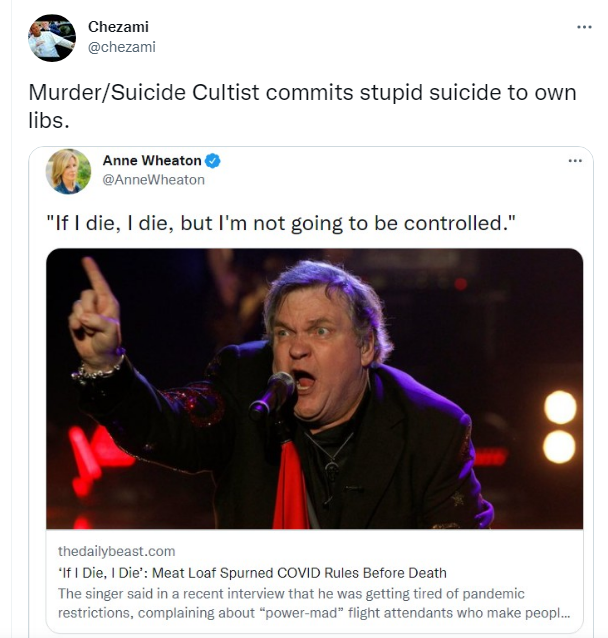 UPDATE: If you're a paid Catholic Apologist, especially one running about teaching on Catholic Social Teaching, but you've allowed Fox News to seize the moral high ground, it might be time to rethink your tactics. 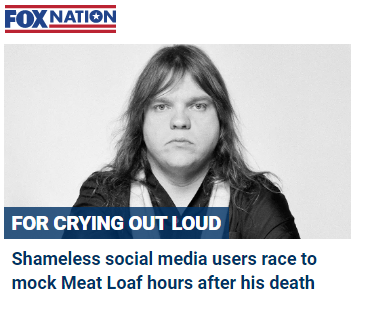 UPDATE II: Two things have developed.  Apparently the reports that he died of Covid are still being confirmed.  From what I can tell, the original source was TMZ, which is slightly less reliable than a supermarket tabloid.  Not that he didn't. Apparently several sources are wanting to verify.  Given the source, and given that I've found no major national outlets saying it was Covid, I'd say waiting is the best bet.
Second, I've been informed that Mark has removed the above Twitter post.  I don't have Twitter so I can't confirm that.  When it comes to Twitter, all I can do is take images of various posts that I'm shown or sent.  If it's true, then I would like to know why.  Is it because Covid might not have been the cause and he's being cautious?  Does he regret indulging in the very evil he once so loudly condemned by exploiting a man's death for political points? I don't know.  Until I know more, I'll leave this up.  If he removes it, and then offers a mea maxima culpa over this deplorable disgrace to Christian Charity, I'll happily delete this and explain why I have done so.
Posted by David Griffey at 4:29 PM

Email ThisBlogThis!Share to TwitterShare to FacebookShare to Pinterest
Labels: Catholic Church and the Left, deals with the Devil, Hypocrisy, The evil the Left does