Why I didn't support Trump 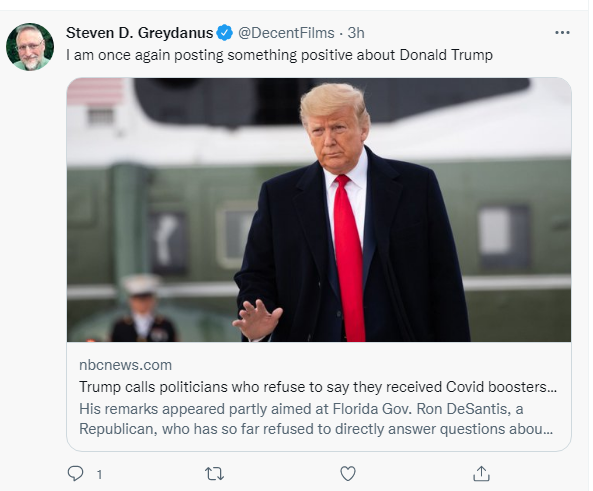 Of course it's about Trump personally saving the world with the vaccines that he all but singlehandedly invented.  Beautiful vaccines.  Wonderful vaccines.  He did that.  It was all him. And woe betide those who dare to suggest otherwise.

The good deacon Steven Greydanus is fine with this, since he, too, puts all hope for deliverance in the efficacy and infallibility of the vaccines - despite all failures and shortcomings of the vaccines that he never mentions.  Because Trump's usual over-the-top rhetoric and attacks are aimed at those who disagree with the Vaccine as God narrative, Deacon Greydanus happily gives Trump a thumbs up.

This is why I had a hard time supporting Trump.  Trump consistently made it clear that there are two kinds of people in the world - those who sit at his feet and sing his praises, and his enemies at the moment.  If I wanted that, I'd vote for Mussolini.

Yes, Trump made good improvements in America until the pandemic hit  But the pandemic showed what happens when you have a unprincipled leader who happens to be effective, versus an effective and principled leader.  I remember well even his most passionate supporters cringing in 2020 as Trump would decry something like government overreach during the pandemic one day, and the next day act as if we must prepare to submit to government overreach or #stupid people.

Perhaps things would be better nowadays had Trump won.  I have a hard time believing they could be any worse and America still exist.  Nonetheless, Trump also taught me that things I cherish would be better only so long as being better benefited Trump's demands for eternal obedience and adoration.  Whatever principles he appeared to have today could easily be thrown out the window tomorrow.  And if you failed to turn and go along with him, well, see his contempt for gutless losers who fail to submit themselves to Trump's beautiful vaccine, and the government demands for submission thereof.