I was shown this:

The quotes in question are here: 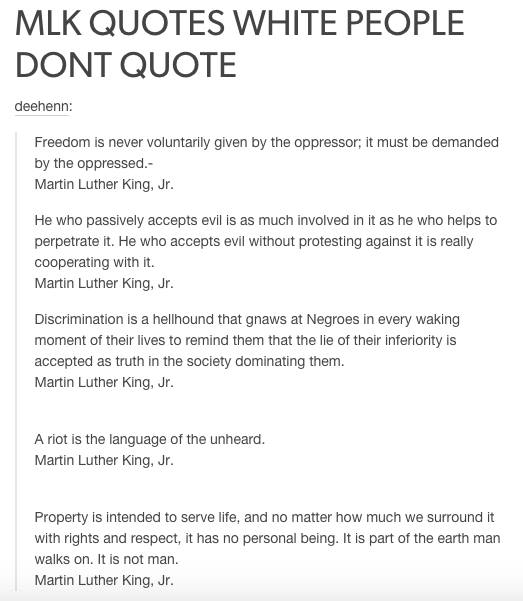 First, could Deacon Greydanus point me to a recent time in which he's referenced whites as an ethnic group in a non-negative, non-pejorative, non-judgmental way?  I'm not thinking of any, though I don't follow everything he writes.  If he can't, then that, good deacon, is racism.  Even if it's against your own race.
Anyway, speaking of racism, notice the lead in to the series of quotes.  Us white folks don't ever talk about these quotes because, well, us white folks. So let's unpack them.
First quote?  I've seen that before.  I can't account for the skin color of those who have quoted it, but I'll assume there's a chance some of them are white. I am, and I've seen it more than once over the years. So nope, that one is known and quoted.
Second quote? Oh yeah.  I 've seen that many, many times.  Usually it's quoted in the context of "the only thing necessary for evil" discussions.  I've seen it recently, quoted by conservatives watching the modern assault on democracy and freedom and life.  So sorry, that's a common one.
Third quote? Nope, you got me there.  That's the first time I've heard of the hellhound quote.  So there's one.  Not sure if it's because of white people being white, but haven't heard it until now.  Or if I did read it, it didn't stick.
Fourth quote?  I've heard this one, but not often.  But it's not white people being white.  It's those who have tried to make MLK into the peace loving non-violent love child who Jesus should have been.  Like Attenborough's Gandhi, he was the man who was never about violence.  Violence, after all, was never, ever the answer (pre-2020 America).  And if mister peace, love and John Lennon songs himself was advocating riots (which are essentially using or threatening violence, assaults, destruction and even terror for a cause), this quote doesn't help.  Hence why I've heard it, but not often (until recently, especially after 2020, I should add)
Last quote?  Yeah, I've heard it.  Not often, since 1) it seems to touch on economics, and 2) it could be seen as a somewhat pro-not-Capitalist private ownership quote.  Given the charge that MLK was a communist agent by some detractors back in the day, I can see this one not flying.  Truth be told, I probably heard it more on leftwing Catholic sites than anywhere.
So that's that.  Most of those listed are quoted, even by white people who spend most of their days being white.  With the exception of hellhound discrimination, if I haven't heard much of them, there is a reason.  And it isn't because of whites being uncomfortable as much as the quotes being avoided by those trying to present MLK in a prepackaged image of convenience.
So there you go.  FWIW, aside from a few conservatives and conservative outlets I know, there is one quote that was conspicuously absent yesterday in all the news and social media outlets I saw: 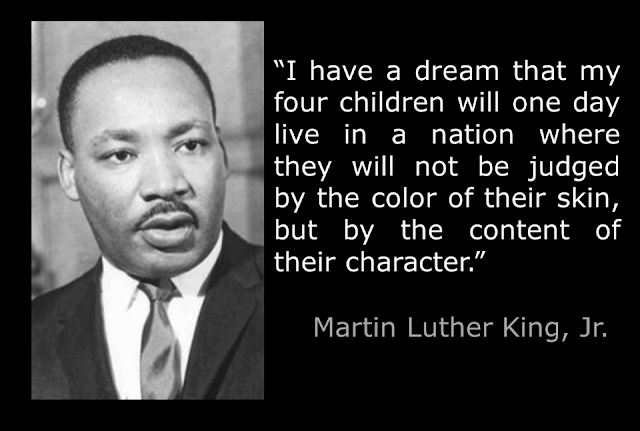 I wonder why. That, to me, is the interesting omission.  It also helps to answer this question:
My third oldest son has an observation that I adore.  If you think you would have been one of the brave heroes of history standing up to the evils of the age, there's a 95% chance you're wrong.  Would I have marched?  Probably not.  I'm not doing much to stop what's happening now.
But if you embrace the modern racism, the racism against whites, the judging of a 12 year old girl as having privilege because of her skin color no matter her station in life, then there is a 99.99% chance you wouldn't have marched.  In fact, there's an overwhelming chance you would have unleashed the fire hoses if you had the chance.
Posted by David Griffey at 6:00 AM

Email ThisBlogThis!Share to TwitterShare to FacebookShare to Pinterest
Labels: Bigotry for the Hip American, Racism, The New Racism and the Catholic Left