And suddenly nobody cares about Martin Luther King 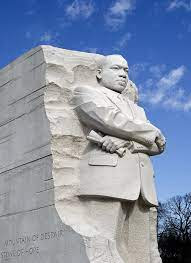 Or so you'd think.  I'd forgotten that this weekend was MLK weekend until it was mentioned on the local weather report.  It's been a long time since I've heard MLK mentioned or quoted.  I know President Biden referenced him in his 'enemies of the state' speech.  But that's one of the few times I've noticed him mentioned in recent months.  Ten years ago I knew three months in advance how many days it was until MLK Day.

This is quite a development.  It was the late 1970s that schools were compelled to give the day off, even before it became an observed federal holiday.  I remember that well.  States that didn't go along with recognizing the day were protested and boycotted.  Economic boycotts in some cases.  Walk outs by black students.  Until they agreed and recognized it.

In our school district, they handled it by making us go on Presidents Day and giving MLK off for a couple years until they could adjust the calendars.  My mom, a former Civil Rights Movement supporter, was upset about that, as were others.  But it was part of the movement to make MLK into America's default hero.

By the 1990s, I began to call him our proxy Jesus.  Since by then mentioning Jesus in mixed company was no longer proper, MLK became a fine alternative.  Plus by then you had several books and documentaries lifting him up to almost godlike saint status.

I remember an episode of The Cosby Show that touched on the holiday.  I forget the storyline.  But the climax of the show centered on the Huxtables watching The Speech on television.  The whole family gathered to watch.  Suddenly halos appeared and a divine light emerged from the television screen as angels gathered to sing holy praises.  I exaggerate of course, but it was that level of hagiographic adoration and worship of the event that was emerging across our country.  The Speech was quickly becoming the single great moment in our nation's history.

When I entered ministry, it was nothing to hear MLK be the most quoted individual in a given sermon.  That was especially true among my African American colleagues.  But even white ministers could be heard quoting and referencing MLK more than anyone else, save perhaps Jesus.

When my sons went to public school in the 00s, MLK season was that, a season.  Before the Winter Break, they would begin preparing for the really big celebration of MLK Day.  January was the crescendo, but it extended through February owing to Black History Month.  Plays and programs, special assignments, movies and specials - it was ten times more than Christmas ever was when I was in school.

By the time I was moving to become Catholic, I remember saying not a week went by that I wouldn't hear MLK referenced at least a half dozen times.  You couldn't encounter a news article or editorial, or a sermon or an interview, or a documentary or speech, without hearing MLK both referenced and quoted.  When I was still part of a ministry conference, I said I didn't get into the whole MLK day brouhaha.  You'd think I denied God's existence.

And then suddenly, BAM!  It started before 2020, but since 2020 he's almost fallen off the edge of the world.  I literally go months now and never hear MLK mentioned.  In fact, the only real mention I've seen of him before last week was when Nikole Hannah-Jones, author of the laughably anti-American 1609 Project, insisted MLK never wanted a nation where we didn't judge based on skin color.

Which might be the problem. What the Left is doing in its move to destroy the West and America is to reinstate racism and racial discrimination and segregation.  White Privilege, Systemic Racism, BLM rely on the idea that you absolutely should judge based on skin color.  After all, how did we know racism had anything to do with George Floyd but by racially profiling the police officer in question, and judging based on his skin color?  How do we know someone has White Privilege but by judging their skin color?

The whole trick is to use whiteness the same way Germans in the 1930s used Jewishness.  The idea that the white race is a pox on humanity, and anything you don't like or want can be blamed on white racism and dispensed with accordingly (including such laughable ideas as equality, liberty, freedom, sanctity of life, and even democracy), is predicated upon judging and condemning based on skin color and ethnicity.

And when racial discrimination and prejudice are so essential, you can't be lifting up some crazy looney adulterer (which has been pointed out quite frequently I've noticed) running around saying we need to judge content of character and stop judging based on color of the skin.  Hence why I had forgotten about this weekend until our dear weather person dropped the name.  I've seen a few things mentioned since.  But nothing - not a damn thing close - to what it used to be.

Welcome to Orwellian America.  Another unperson for your lost files.

Email ThisBlogThis!Share to TwitterShare to FacebookShare to Pinterest
Labels: Left and a New Communism, Our Post-American Nation