The rise and fall of Eric Clapton

Old Slowhand.  Growing up in the 1970s and 1980s, there were many different cliques to belong to.  Many different music styles to enjoy.  Many different hobbies and interests to pursue.  But there was one thing that seemed to unite all who grew up in the shadow of the 1960s: Eric Clapton epitomized awesome coolness.

It's true.  Over the years, his story would change.  He would have ups and downs and suffer tragic loss.  But he was always respected, always admired, and always liked.  In a world filled to the brim with personalities who weren't always the most likeable, Clapton was at least respected, and often spoken well of by his industry.

But like all that the Left must poison and destroy, that was yesterday.  Today, Clapton hath blasphemed the Leftwing narrative of Vaccine god, and thus the propaganda organs pounce.  The leftist thralls and storm troopers pounce.

Even Catholics set aside such notions as Christian charity or reaching out to those who are hurting in the world and pounce.

I especially like Mark's definition of rebel which fits like a glove on the modern Left.  After all, the entire rise of the 21st Century Left could be be summed up by saying 'You have heard postwar liberalism say, but the Left now says.'  Which is a roundabout way of saying those principles liberals advocated were a lie.  They only supported rebels against the civilization they sought to destroy.  Now that they have power there will be no more rebels, thank you.

Or, perhaps another way of saying it: You heard liberals once say we only want a world where all animals are equal.  The Left now says, however, that we must get used to a world where some animals are more equal than others. 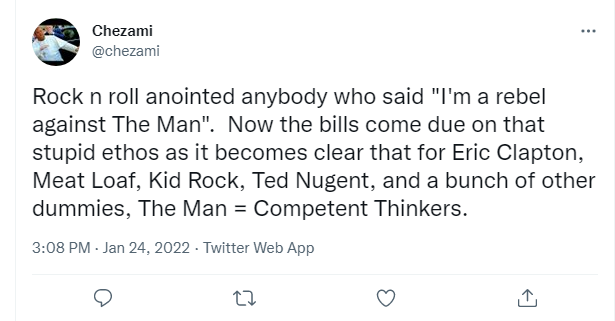 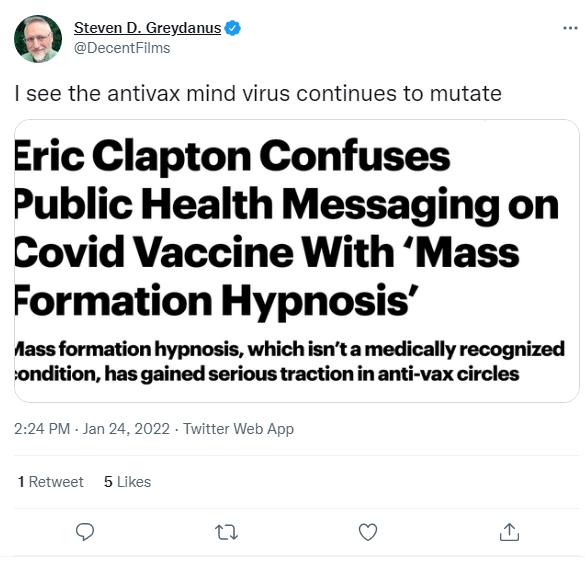 Deacon Greydanus and Mr. Shea appear to be aligning with this global force, perhaps in the hope that it will be those other animals deemed less equal and therefore worthy of the glue factory. Those of us not prepared to throw future generations under the bus would do well to resist that particular temptation.

Email ThisBlogThis!Share to TwitterShare to FacebookShare to Pinterest
Labels: Hypocrisy, Liberal "Tolerance", The End of Liberalism, The Party of Lies