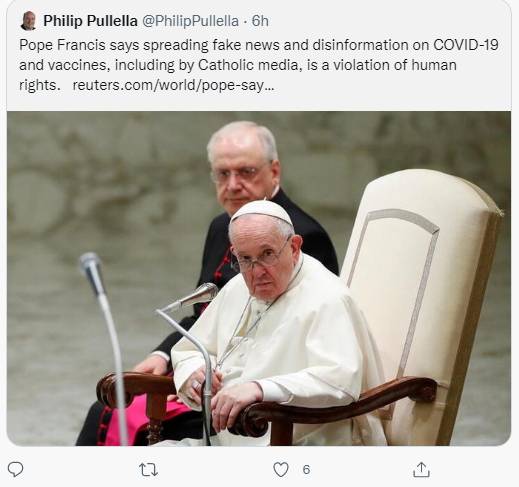 Though he's hardly alone in that.  It's just Catholicism, unlike Protestantism, has a few restrictions that make simply tossing out an old teaching you no longer like a bit difficult.  And therein lies the tension I think.
Pope Francis uncritically takes leftwing talking points and narratives at face value.  He just does.  On those rarest of occasions where he calls out a leftwing sin - say homosexuality or abortion - he's ever so careful to make sure he only condemns the sin, not the sinner.  And then, to hedge the bet, he also makes it clear it doesn't really matter if you endorse or engage in these sins.  Not optimal perhaps, but certainly not a deal breaker. All one big, happy family.  The important thing is that you accept at face value, as he accepts at face value, an endless string of leftwing narratives, platforms and agendas: global warming, immigration, gun control, systemic racism, the latest Covid-19 solutions, and on and on.
His wrath is forever aimed at faithful Catholics who believe that Catholicism is somehow uniquely important.  What's worse, they believe its teachings are really non-negotiable.  Or they attend the Latin Mass, which seems to bother Pope Francis more than Larry Flynt bothered Jerry Falwell.  And if you question these various leftwing narratives or agendas, he comes down on you like white on rice.  Not only does he condemn your position, but he's not adverse to hyper-politicized rhetoric, and even some select judgementalism aimed at your motives and inner thoughts.
Sorry, but that's as useful to Catholicism, or even authentic Christianity, in the modern world as an accordion is for deer hunting.  The fact that the majority of Catholics no longer believe entire reams of Catholic teaching doesn't seem to bother him.  In fact, what appears to bother him is that there are Catholics who care that the majority of Catholics no longer believe in Catholic teaching.  And Catholics who jettison Church morals for some abortion, sex, drugs and hedonism?  Again, it doesn't seem to bother him.  If confronted, that's when we learn how little he wants to judge anyone.
Sometimes it's like Ohio State's football team letting Michigan's coach coach us in the big game.  I don't think Pope Francis cares if I, or anyone really, is necessarily Catholic.   If we are and agree with his politics as first priority, that's fine. Maybe even the best.  But he's made it clear by his rhetoric and his priorities that he'd rather you reject God altogether and never grace the doors of a Church as long as you agree with him on his political stances.   Hate to say it so bluntly, but I have as difficult a time seeing Pope Francis as a religious leader as I do seeing late night activists as comedians.
Posted by David Griffey at 5:30 AM

Email ThisBlogThis!Share to TwitterShare to FacebookShare to Pinterest
Labels: Catholic, Catholic Church and the Left, Post Modern Catholicism, The Pope