A product of our imagination

Years and years ago, it was 1981 I believe, I had my hands on that most precious of all annual publications: the Wishbook.  Technically only Sears had a 'Wishbook' by name, but like Kleenex and Xerox, "Wishbook" came to represent any of the Christmas Holiday Catalogs that came from various retail giants like JC Penney, Sears and Monkey Wards.
That particular year I was gushing over a model diorama of the Battle for Hoth from the recently released The Empire Strikes Back.  That film was - and remains - the one Star Wars movie (pre-Disney) that I never saw in theaters.  The reasons were many, but family crises and health issues for my grandmother were among the reasons.

Despite this, or perhaps because of, I tried to get my hands on anything and everything 'ESB.'  Since I was going into high school, playing with the famous Kenner brand Star Wars toys was off the table, so a model seemed the next best thing.  After all, as you got older, it became more and more difficult to exercise that old imagination in ways that wouldn't draw scorn from our surrounding culture.
As I've said, it proved to be a disappointment.  I didn't pay attention to the dimensions, and was rather crestfallen when the package arrived in a box barely large enough for a pair of shoes.  It was the first time I went through the trouble of returning something I actually had wanted.  I remember looking again at the picture and wondering how I missed the size of the thing.
Another thing I missed, or paid scant attention to, was a strange game I first saw or heard of in that very catalogue.  On the same page was something called "Dungeons and Dragons".  It said it was a game, but was in the section that included models and other similar hobbies.  Some of the pictures looked like they were of little miniature models.  But some of the section said it was a game, and all I saw were books that looked somewhat like thin textbooks.  No game box, game board or playing pieces.  How that was a game I couldn't guess.
Later that Fall, being my freshman year of high school, I was sitting with some fellows in our study hall.  Our study hall was actually our cafeteria.  Sitting at the tables, three of my fellow freshmen one day were doing something that caught my eye.  They were drawing something on graph paper.
Back then, graph paper existed in school for two reasons: A math class or shop class.  Since none of them were in shop, and they were in my math class and I couldn't recall anything to do with graph paper, I asked what they were doing. One who was named Rodney explained he was 'drawing a dungeon'.  After more prodding, he explained it was for that game I remembered seeing earlier in the catalog.  He said it was more or less the game's board he was drawing, and that it would be used for the game he was preparing.
I couldn't fathom it.  How do you 'draw' a game board?  What does that even mean?  And how do you know where things are?  I know where Boardwalk is, and where Kamchatka is, but what does it mean to 'put treasure' or 'place monsters'?  It made no sense at all.  So he showed me a book I had never seen before.  The cover had rather amateurish artwork, the stuff I'd expect on some kid's book.  But inside it was something I would have paid a million dollars for when I was a kid. 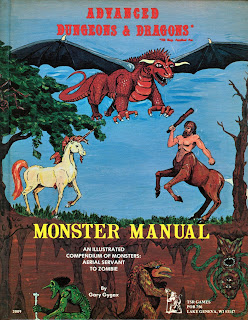