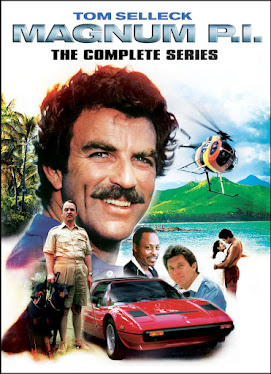 So this year has seen me do something I never thought I'd do, and that's 'binge watch.'  Largely owing to the lack of alternatives, and the fact that though the boys live with us right now during the lockdowns and restrictions, they're still mighty busy, we sought other outlets for those downtimes.  Furthermore, owing to the need to keep an eye on my Mom, our options for exotic international cruises and African safaris are limited.  For that matter, an overnight stay at a local hotel and a night out at a restaurant might as well be an African safari.

While reading and talking and having coffee together can still have their special moments after almost 28 years of marriage, there sometimes needs to be a few options beyond those time tested activities.  Since we don't pay for any streaming services, we take what we can get.  One of the things we could get, and that came to us in the form of a birthday present from the boys, was one of the most 1980s of all television shows of the 1980s, Magnum P.I.

Originally envisioned as a Los Angeles based spin off from The Rockford Files (Selleck had costarred in a couple episodes as a rival detective), the studios went a different direction.  The television show Hawaii Five-O had just ended, and the network was stuck with all of the filming apparatus in Hawaii.  So they packed up the Magnum team and shipped them off to Hawaii, in which Hawaii almost became more of a character than it had with Hawaii Five-O (along with the legendary porsche red Ferrari).

In some ways, that show embodied the early 1980s about as well as any.  For my part, I didn't watch it much back then.  I was a Simon and Simon guy, wishing I could be as cool as Gerald Mcraney's Rick (yet knowing in my gut I would never be that cool).  I was aware of Magnum, however, and it was the show everyone else seemed to be watching, at least until Miami Vice changed the direction of such television fare.

Everyone was watching except my Mom I should say. She couldn't stand it, Selleck, the premise or any of it.  I don't know if she watched it, but it wasn't one of her shows, and that was enough for her.  My Dad wasn't a fan either, though I think he gave it a shot and watched a few episodes.  And why weren't they fans?

Well first, by its standards of the day, it was pretty racy.  For the ladies, Selleck or his two buddies had to appear at least once in every episode stripped down to their skivvies, shirtless and engaged in some sweat inducing labor.  Not to be left out, for the guys almost every episode had to have panning shots of dozens of well structured women who had to share about one bathing suit between them.  It was quite brilliant, providing eye-candy for both sexes when we laughably believed there were two sexes.  In addition to that, per the storylines, sleeping around and one night stands were by then a forgone conclusion.

For an era that had the comedy Three's Company still operate under the assumption that unmarried women and men shouldn't be living together, that was quite a step in a new direction.  Sure, night time dramas like Dallas had already sanctified the sexual revolution as normal, but those were seen as nighttime soap operas.  They weren't for general audiences.  Magnum was a 'detective' show, harkening back to Columbo or Kojak or McLoud or any others on the Sunday Mystery Movie lineup.  These were shows that included the kids in the viewing (I know since I remember watching them with the family).

But not Magnum.  Though the earlier episodes were much more racy and suggestive than later ones, the whole still had a definite 'not for the young'uns' vibe that took a generation used to 'family television time' by surprise.

Another thing it did was take the critical view of America and the West that was coming to dominate television (and certainly film) by then.  By the time Magnum was dropped mid-season in a December pickup, All and the Family and Norman Lear's battery of 'liberal sermons in sitcom form' had begun to assault the foundations of almost anything and everything American.  Cynicism was the name, and skepticism the game when looking at the 2500 year old Christian and Western traditions we had inherited.

Magnum didn't shy from this development.  Despite it's often whimsical storylines and good humor, it took on issues of national corruption, government intrigue, America's past sins and the sins of the West in general.  Sometimes these were done flagrantly, often referencing some storyline with the character of Higgins, the resident Brit veteran from England's colonial arms period (played brilliantly by Texas born comedic actor John Hillerman).  Some episodes had direct reference to the internment of the Japanese, or atrocities committed by soldiers in colonial Britain or by our own troops in Vietnam (Magnum and his buddies were supposedly vets who had served together in Vietnam). 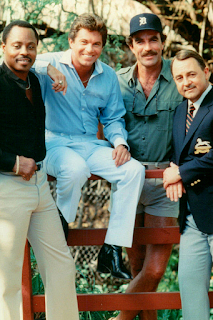 All weighty stuff when compared to your average episode of Columbo, or considering that just ten years earlier shows like Green Acres or The Brady Bunch were prime time hits.   Of course it was critical by those standards, yet still wrapped up with the assumption that 'West/America good, despite some bad in their histories'.  Compared to today it looks almost like a production of Frank Capra's Why We Fight series.  Today, we would learn that merely assuming there are boys and girls is how Magnum's team would have looked at racism or America's history of slavery.

It was also cutting edge in other ways.  The character of T.C. is African American, and yet that is seldom the focus.  Unlike most shows up to that point, either blacks weren't prominent parts of a cast or they were singled out and focused on for the novelty of being main characters (see Sanford and Son or The Jeffersons).  In this case, T.C. just happens to be black.  That was actually quite a thing and not common as late as the 1980s (oddly, one of the earliest shows to showcase a black character prominently in an ensemble cast and yet not making his race an issue was the farcical sitcom Hogan's Heroes - and that during the Civil Rights era to boot). It was time to put race behind us and be color blind.  RIP.

Another cutting edge storyline was Magnum and his buddies as those Vietnam vets.  Vietnam was only a half dozen years old when the show premiered.  Until then, Hollywood didn't know what to do about this first war we lost.  Either strange surreal war operas or ignoring it altogether seemed to be the preference.  If a character in a television show appeared, it was often to preach about the pointlessness of the war.  In Magnum, the vets simply were vets.  The war happened, they served.  That was that.  The comradery they developed between themselves and the character of Higgins (of WWII service, though Hillerman was far too young to have been a WWII vet), demonstrated that the show's premise was that Vietnam vets had every right to be counted among America's veteran's.  A large leap for those days.

So I can see the appeal of the show, beyond merely the obvious eye-candy elements.  A superb chemistry between the leads, utilizing the fantasy of Hawaii as paradise on earth, making sure to include plenty of iconic images (the helicopter, the cars, the dobermans, the estate), the continual breaking of the fourth wall, the many episodes that appealed to the past and tweaked the old nostalgia were all surefire methods of ensuring a strong connection with a television audience.  So strong was the connection that when it went off the air - supposedly at the death of Magnum - the audience outcry was heard and another final season hurriedly put into production.

It's odd, however, as I watch the old episodes, some being forty years old.  It's funny how it's not just the obvious cultural rot I notice.  It's not that Magnum would almost be too tame for Disney by our standards today.  It's not even that Magnum clearly assumed a positive Western influence as opposed to our modern era seeking to destroy the whole lot of the Christian West.  It's the little things I see.

In one episode, the villain is peering over a fence, gawking at the obligatory shot of pleasantly endowed women playing on the beach.  He makes some comments, then turns around.  A henchman is sitting at a patio table, working on a typewriter (note: not a laptop).  The old fellow (played by vet actor Michael Gazzo, who famously replaced Richard Castellano in The Godfather, Part II), turns about and chastises the henchman for not taking in the scenery.  "Don't you like girls", he asks?  The man responds of course he does.

Funny, but that caught my attention.  The assumption - you're a guy, why aren't you over here looking at the lasses?  The question, with  only the slightest hint of a possible alternative answer.  The response, almost simple, no outrage, no arguing.  Just plain, obvious dialogue from a time that took these things for granted.  The fact that they were entertaining the idea that there were boys and girls and some natural attraction is as radical in today's eyes as pointing out in a whimsical detective show that America did some bad things was in 1980.  Only in the 80s, it was more merciful and forgiving of our history of slavery than we are today when we imagine boys and girls exist.  Such are the changing times.