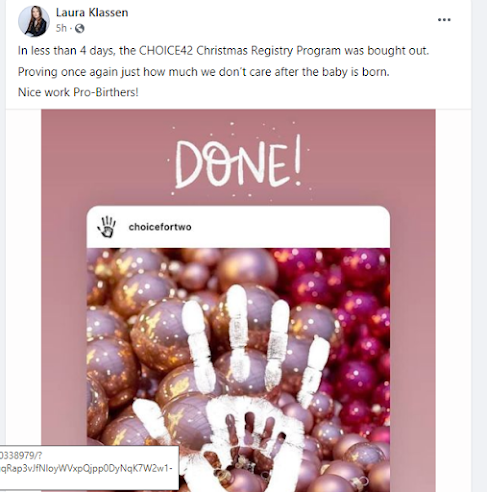 Laura Klassen is a small, shining star in the darkness of our current era of death.  If the WHO is to be believed, the number of abortions performed in the last 50 years across the world - assuming numbers are more or less consistent year after year - would top 1.5 billion.  Let that sink in.  That's STEM for you folks.  That's our modern era.  That's the era that made the first half of the 20th Century that included two industrial world wars and the holocaust the more pro-life half of the century.

We all know the lion's share of the abortions is to support the modern women's movement and the sex and drugs revolution that opened the gate to over 40 million dead from HIV/AIDS, tens of millions dead from recreational drugs, not to mention endless millions upon millions of lives wrecked and ruined by STDs, broken homes and relationships, skyrocketing suicide and drug dependency rates ... need I go on?

It's probably not a stretch to say in the last half century we have caused more slaughter, death, suffering and misery than any period in human history - perhaps than all the periods of human history combined - all in order to get high and laid.  Quite an accomplishment for the most educated generation that has ever lived.

Yes, that is our legacy.  That is what future ages will look back upon and judge.  If there is any justice, they will judge us as mercilessly and ruthlessly as we spend our time judging those who came before us.  This is also what God no doubt sees.  I would like to think He looks past the clever arguments courtesy of our snappy undergrad diplomas, past our Netflix and our latest smartphones, past our Facebook postering and media punditry, and sees the souls of hundreds of millions of murdered, aborted and dead innocents laid upon the altar of our libidos.

Now, it takes a certain golly-gee-wiz to have this as your generational accomplishment and yet see yourselves as the intellectual apex of cognitive evolution and the moral and ethical hub of godlike perfection around which the universe will forever turn.  In fact, so vast is the yawning chasm between the high opinion we have of ourselves and the cataclysmic disaster we have visited on the world and the future, you know there has to be some pretty creative BS involved in our reasoning and rationalizations behind it all.

For instance, you have the abortion culture that casts a long shadow over unprecedented loneliness, hopelessness, regular mass killings and school shootings, drug addiction and suicide among even our children as young as ten years old.  In America, our womenfolk alone have aborted over 60 million pregnancies just to prove what giving women equality will accomplish.  Most sexed up men with no particular religious commitments approve this development.  This is what the godless and the modernists defend, promote, blame others for, or excuse.

The most shocking thing, however, are all of those who outwardly condemn this and even say it's bad, but then fully support the theories, ideas, policies, whimsical fairy thinking and idiocy that has brought us here.  More to the point, they actually support those who openly and proudly support this culture of death and blasphemous debauchery.

How do they do this?  How do they insist, for instance, that they are 'whole life' this or 'new prolife' that and yet throw themselves in an alliance behind the forces, movements and people who are entirely dedicated to this era of holocaust for sex?

Well, among other things, they lie.  Or at least they accept the lies of the Father of Lies who is no doubt behind these developments.  They accept the premises behind the abortion culture, the feminist culture, the godless culture of hedonism and narcissism that has brought us to the top of Mount Carcass.  They repeat the lies whenever they need to justify their allegiance with such an openly naked assault on the sanctity of God's creation.

This is largely political rhetoric of the old 'not God but only our party's horses and chariots can save us' mentality.  You can't possibly care if you don't support our obviously infallible solutions.  But whatever, it's an effective way of putting those who look across the almost two billion lives cut short by our sex drives on the defensive.

It's a lie of course.  There is actually quite a body of stats and studies suggesting that when it comes to charity, giving, helping others and devoting oneself to the least of these, those who fall in line with the anti-abortion movement - conservatives, Christians and yes, pro-life Americans - are among the most giving and caring there are.

I'm willing to dismiss such studies and concede that, in the end, it likely doesn't make much difference which groups people belong to.  Chances are that abortion activists, liberal Democrats and atheists are as giving and caring of babies, mothers, poor people and others as conservatives, Christians, and pro-life Americans, and vice versa. I'm willing to concede that point.

There is therefore no reason for anyone - pro-abortion, New Prolife Catholic, or even pope - to assume that merely questioning the political and socioeconomic policies of certain political parties negates the goodness of people or makes it likely they don't care about anyone but themselves.  Fact is, there is no real or factual reason to believe a person against abortion is any less giving or willing to help others - including babies and moms - than anyone else.  Unless you believe it is only the horses and chariots of a single political movement and nothing else that can truly save, it is a false accusation.

Assuming not, then we must concede that the oft repeated mantra that 'they oppose abortion but don't care about moms or babies' is simply a lie.  Plain and simple.  And Ms. Klassen is one of the most visible examples out there to show the lie.  Though she's known for her clever and quirky videos that take pro-abortion arguments and shove them back down the abortion culture's throat with a candle on it, in truth much of her industry is centered around helping pregnant moms and new moms and their babies.  Just like conservatives, Christians, Americans and anti-abortion activists I've known have done for years.

She has a public platform, and is able to gather help from a wide variety of sources when she isn't fighting being shut down by the Tech Empire.  May God bless her efforts and all who have repeatedly risen to the occasion when she has called out for help for struggling moms or children.  There are many ways to help many people, and if allowed to go about our ways, most people will rise to the occasion.  Heck, sometimes those who are giving don't even go to church!  I'd like to think that's the beautiful spark of the Divine in all of us.

But if God ever breathes life into this valley of bones and rotting corpses that our modern era of STEM and educated celebrity worship has accumulated, it will be through the works of those like Ms. Klassen.  Sadly, at times it is Christians, believers, even the ones committed to stopping the abortion era carnage that she runs up against the most.  They won't be the ones future generations who survive our age will remember fondly.

Ms. Klassen going where most brave defenders of life's sanctity fear to tread.

The hand of the Lord was upon me, and carried me out in the spirit of the Lord, and set me down in the midst of the valley which was full of bones, and caused me to pass by them round about: and, behold, there were very many bones in the open valley; and, lo, they were very dry.  And he said unto me, Son of man, can these bones live?  And I answered, O Lord God, thou knowest.   Ezekiel 37.1-3.

Email ThisBlogThis!Share to TwitterShare to FacebookShare to Pinterest
Labels: Abortion, Culture of Death, pro life, The Party of Lies