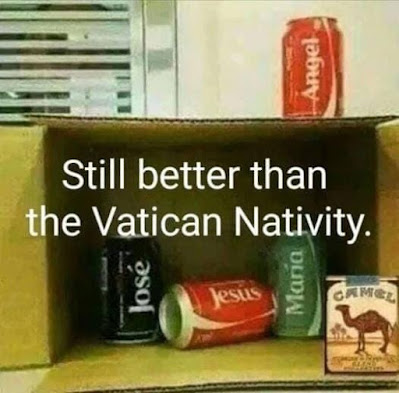 I know there has been quite a bit of hooha over the Vatican's nativity scene.  And to me it does look awful.  I also get that the whole 'beauty is in the eyes' and 'one man's art' has been overplayed to the point where a moldy banana skin on a wall is considered art today.  Thus is the world we live in.

Nonetheless, I also get that there is a certain level of subjectivity where art and entertainment and college bowl rankings are concerned.  I can't imagine anyone looking at this Nativity scene and saying 'Wow, that's beautiful.'  But then I can't get how someone could watch The Godfather and say it wasn't any good, or listen to Mozart and say no big deal, or look at the Sistine Chapel and say there's another case of white racist supremacy, or think that You're So Vain isn't a horrible song.   But there are those who can, because there is some truth to the opinions of the beholder having the final say.

Posted by David Griffey at 3:38 PM