The best Christmas album ever 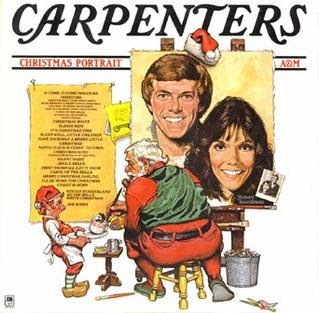 I know I'm inclined toward a certain level of exaggeration on my internet postings, but I mean it this time.  I think The Carpenter's A Christmas Portrait is simply the best Christmas album ever produced.  I suppose you could argue the greatest, but I'm willing to concede there might be others more worthy of that title.

After all, you don't have to be the best to be the greatest.  Take Citizen Kane.  It's, It's not Welle's best or most enjoyable movie, but undeniably his greatest- perhaps the greatest - due to its influence and the possibilities it ushered in with filmmaking.  Or The Beatles' Sgt. Pepper's Lonely Hearts Club Band.  Often named the greatest album of all time, it is hardly the best album of all time.  Heck, I don't think it's even their best album.  But in terms of influence and impact on everything from music to culture, I'm at pains to think of another single album to match its accomplishments.

So when I say best, I mean best in the sense of most enjoyable, nicest to listen to overall album that I could hear a million times each holiday season and still hear something new.  It's the album we kick off the 'Christmas season' (Madison Ave. version) with as soon as Santa rolls by in Macy's Thanksgiving Day Parade.   My boys have said that the album's first chords are like Trick or Treat for Halloween.  It's the music they think of that says 'the Season is upon us!'  I love that.  I love the fact that we have these traditions that our sons have an almost Pavlovian response to, so engrained are they in their minds.

But it's a fine album, and for anyone wanting an entire Christmas album to listen to, this would be it.  A genuine Christmas concept album, it strikes a fine balance between the whimsical and serious, between the secular and the sacred.  Most love and respect goes to the late Karen Carpenter for  her smooth as silk vocals, and rightly so I think.  But in many ways, her brother Richard deserves much of the credit for this production.  He was the creative force behind the duo, and the arrangements, the production, the instrumentals rest heavily on his shoulders and are what make this an album leaps and bounds above most others, which are often merely collections of Christmas songs and little more.

One of the few "Christmas" love songs that manage to make

Christmas an indispensable part of the song.