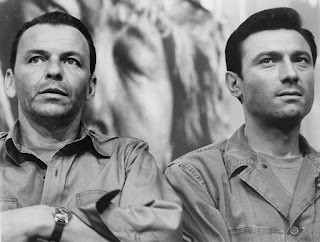 I realize the term is a loaded one, and conjurers up images of Frank Sinatra and Laurence Harvey waiting for Angela Lansbury to play the Queen of Diamonds.  That sort of brainwashing that we always associated with radical totalitarian states, communist regimes, and Nazi reigns of terror.  Or, for my generation, the evil Big Brother government in the good old US of A during the Reagan years.

Nonetheless, I don't think it has to be that sort of Hollywood type of shenanigan to rate as brainwashing, if you think about it.  Perhaps brainwashing is a little more subtle than just being trained to become a mindless monkey who picks up a pistol and shoots an innocent carton of milk with a politician behind it. Maybe, just maybe, it can be more clever, more slick and almost unrecognizable even as you recognize it.

I thought of that as my wife and I continue our little skip through 80s nostalgia courtesy of the Magnum P.I set our boys got us for our birthdays.  We were watching the show and laughing and musing on how things were and how they changed.  Some of it was obviously the radical social justice movement we see scourging our nation today that has brought about the changes.  But something else caught my attention as we compared life c. 1980 and life today.

As we watched the show, we noticed no end of scenes that took part around the beach, or were centered around sporting events (to display the prodigious athleticism of the stars), or in various gatherings that demonstrated the cultural trappings of the illustrious estate in which T. Magnum lived.  When we saw those, we quipped 'they're not social distancing!' or pointed out 'hey, they're not wearing masks!'  Sometimes we would see a fight scene and comment 'that's not a safe distance!'  Of course it was all joking. It was all in good fun.  But I notice something.

Each time we see things like that, and it hasn't just been with Magnum P.I. DVDs, we say the same thing.  If we don't say it, we think it.  I know I do.  I almost instinctively see some old movie or show and say to myself 'not social distancing!'  It's funny.  And yet, it's there.  I can barely watch or see anything that this doesn't come to my mind.  An old sitcom, some epic from the 1950s, even The Empire Strikes Back.  We watched that in tribute to the Star Wars actors who passed this year and my sons wondered how they could social distance on the Millennium Falcon.

After all, we hear 'Covid' at least five hundred times a day.  On the news we'll hear references to the pandemic at every turn.  Whatever the story, Covid is injected into the segment.  If it's a kid's play in school, the distancing will be mentioned due to Covid.  If a sporting event, Covid.  If a political story, Covid.  If the weather or traffic is mentioned, somehow the pandemic is slipped into the discussion. Probably half to two thirds of every newscast is about Covid, sometimes with heartbreaking (and scary) stories about the toll it has taken on its victims.

And it's not just the news.  At the grocery store, every ten minutes or so there is a special announcement reminding us to help fight Covid.  I hear it on the radio.  I see it on signs driving.  They have commercials that are minute long scare stories, warning of Covid and the need to do all that we're told to do to combat the virus. It's everywhere.

So I thought about that.  I thought about the fact that almost any time we see a gathering, on the news, in sports, driving down the street, or in old movies, our reaction is the same.  And it's not just the family.  Others have said the same thing. Friends my wife works with have noticed the same tendency.  I've also seen individuals on the Internet comment about having the same reactions.  We just see a crowd, even in an old painting or a photo from a hundred years ago, and we automatically think 'Ah, there you go, no social distancing; no masks!' It's all in fun.  Right?

Or, could it be brainwashing?

Email ThisBlogThis!Share to TwitterShare to FacebookShare to Pinterest
Labels: Our Big Politically Correct Brother, The Decline and Fall of the American Dream