In one easy picture: 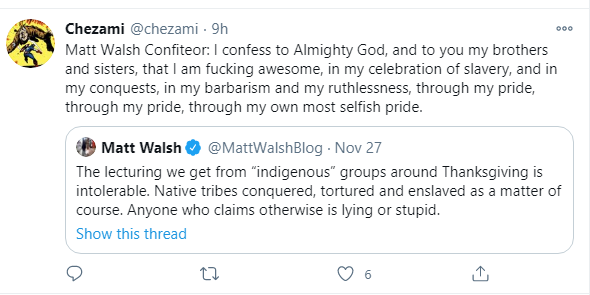 This was shown me because of my focus on the growing love we have for American Indian culture.  With a blank slate, we celebrate 'Indigenous Peoples'.  I've said I would never support a celebration of 'European Peoples' because that's too broad, and could include too many things that shouldn't be celebrated.  When it comes to Europe, that's clearly the belief held by many today.  Europe, Christianity, America - all evil, all bad, no way can they be celebrated.  But American Indians?  Why, 100% celebration there.

Partly this is due to American Indian activists not being beholden to the old Christian notion of repentance and confession of sins.  That is something unique to the Christian West.  Most cultures and societies don't spend their time beating up on their ancestors, their heritage, their culture or their people.  So American Indian activists can promote their own heritage 100%, condemn anything from Europe 100%, and increasingly be given the free megaphone to do so.

This includes support from a growing number of Christians and Christian leaders, who seem to agree that the Christian West brought bupkis to the New World; not democracy, not civil rights, not sanctity of life, certainly not the Gospel.  In fact, that's the craziest thing.  I get non-believers saying the Gospel is crap and not worth the bad that happened.  But more and more I see Christian - and Catholic - leaders saying the same thing.  And that's a problem if our assessment of the Gospel's worth hits about the same note as non-believers.

We're acting as if things like civil rights, equality and the sanctity of human life - not to mention the Gospel of Jesus Christ - are garbage.  More to the point, a culture that was pre-modern, where matricide, infanticide, patricide, human sacrifice, and its own fair share of genocide and slavery, was just awesome on every level.

So common is this now that one of my sons experienced a debate in his college cultural anthropology class.  The issue of pre-Columbian American culture came around, and their practice of conquest, slavery and human sacrifice came up.  The class held a splendid debate where the conclusion was - who are we to judge?  Ours is the worst culture to ever exist after all.  Plus overpopulation is causing Global Warming.  The Indians had it right.  Keep overpopulation in check.  If their reasoning was a bit on the superstitious level (just like moderns who still believe that God in a manger silliness), the reasoning was quite sound.  You trim off the undesirables, the unwanted, the inconvenient.  You don't need elaborate ceremonies appeasing some fire god today of course.  We have Science.  But the desire to keep too many people from happening was quite sound, and of course to be celebrated - and copied.

Such is the legacy of what we're seeing with the mantra of 'Indigenous People rock it 100%, not like evil Europeans with their Jesus and democracy and human rights rubbish'.  That is a major problem, and Matt Walsh, who I'm no particular fan of, is right to call it out.  Even if he didn't do a particularly good job of presenting it in a way that would encourage discourse, at least he threw it out there.  A problem with Twitter right there.

But Mark could have responded with - anything to do with the topic at hand.  He could have said why Walsh is wrong. He could have defended the unqualified celebration of such a culture and its trappings, despite holding 'pro-life' views.  He could have explained that the celebrations should be understood someway, or that it is wrong to give a blank check as many do.

Instead, you get Twittertalk, which means acting like you haven't made it through puberty yet, with variations on 'your mamma's ugly and she wears army boots'.  Just the type of behavior our children in our age of suicide, drugs and depression need to see.  I would expect Mark's reply from someone who has yet to experience adolescence.  And yet that, along with the requisite F-Bombs that define much of his Catholic Social teaching, is about par for the Twitter course.

I believe Social Media has devastated our intelligence, our discourse and our society.  Nowhere is this more evident than Twitter.  After seeing some unfortunate Twitter entries by Dawn Eden, I was happy to see her post that she was taking a break from the platform.  That is good.  Like most carbon based lifeforms, she's better than that.   I see Twitter being a 0% gain in the world of human interaction.  And nothing demonstrates that assessment better than the above image.  Not because it is uniquely bad.  Quiet the contrary, because it it almost universally indicative of how people handle themselves on Twitter.