For most of my young life,  I don't remember asking for anything in particular at Christmas.  I just took what was under the tree.  If I got a Fort Apache playset, a WWII army soldiers set, a Lionel train set, or anything of the sort, that's what I got.  And that became my favorite toy of the moment.  Sometimes, as in the WWII sets, they became my favorites for many years.  Occasionally I might ask for something small, but usually the big presents were surprises, and yearly favorites because they were mine.

My early Christmases were simply awesome just because they were Christmas.  I'm actually old enough to remember when McDonald's was a rare treat, candy was an occasional treat, usually confined to October through Easter (or I earned extra money and went to the local drug store to buy my own), and with the rarest of exceptions, toys and games came at Christmas and birthdays.  In my case, since my birthday was in December, I had to wait the entire year.

Needless to say, I wasn't picky or overly demanding.  Whatever was under the tree would be good enough.  And typically it was.  My Dad had grown up in the Great Depression under the description 'dirt poor.'  Literally.  The house they moved into had no flooring.  No doors either.  His father was a hard worker, but also an abusive drunk.  Hence I never knew Dad's mother, who was driven to an early grave by, among other things, the abuse.

It goes without saying that their Christmases were a sparse affair.  Usually without trees, he said the ironing board was the typical platform for whatever gifts - if any - they received.  Oddly enough, despite all of their white privilege in such matters, all of his brothers and he resolved to make sure their own children never experienced that level of abuse, poverty, or lost Christmases.

So when I was growing up, Dad made sure that if nothing else, the morning of Christmas was a resplendent affair, as least in the most Diskensonian/Madison Ave sense of the word.  My sister and I would many times over the years speak of that special, magical moment when we rushed down the stairs on Christmas morning before any lights were on, peaked around the edge of the wall, and saw the darkened tree surrounded by presents. Even if I had asked for nothing, I was thrilled at whatever possibilities were before us.

All that changed my sixth grade year.  The previous Christmas my parents picked, out of the blue, some toys known as 'Micronauts'.  Star Wars was all the rage, and most of my friends were piling up mounds of Kenner's famous Star Wars action figures line.  For reasons I don't know, however, my parents saw these little gems, based upon a comic and toy line out of Japan. 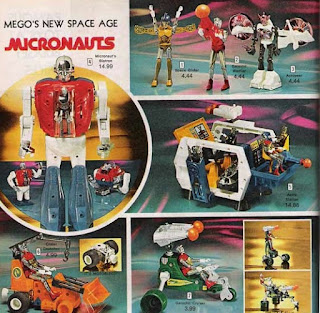 The Interchangeable World of the Micronauts, or so it was called.  They were roughly space age, sci-fi figures like many others.  The spin was that you could mix and match, disassemble and reassemble as you saw fit.  Each figure, and each playset, contained multiple ways they could be joined, added to and changed.  They had 'official' ways to be built, but the sky was the limit, confined only to the child's imagination.

Because of my tendency to blather on about things I liked, I spread the good news of the Micronauts to my friends, and by the next Christmas, we were all running about, asking to add to our collections.  Being among the first to see them, I had one of the biggest collections.  That was the first time I remember having a 'collection' of anything, though I had accumulated quite a store of toy soldiers from the various WWII sets I got as a kid (including a spectacular 'Guns of Navarone' playset that was all that and a bag or two of chips).

That Christmas, my sixth grade year in which we were all crammed into a 19th century school building complete with cloak rooms and old wooden floors, it was all about Micronauts.  I even broke with my usual blah attitude about comic books and did everything to get the series produced by Marvel Comics based on the toyline.  I usually only got comics when someone gave me one because they assumed since I liked to read that meant comic books.  This time it was me doing the asking.

But that was the first time I had ever asked for anything big going into Christmas. I wasn't disappointed, and the tree that year was stacked high with different products from the toy line.  I'm sure I received other things, but it was those that grabbed and held my attention, and would for the remainder of my grammar school year.   I just thought of that as I ask my sons what they want for Christmas.  I don't remember being asked.  I usually just took whatever was there.  But for the first time, in 1978 when I was in sixth grade, I asked.  And having asked, I received.