The hypocrisy and racism of the Left made simple 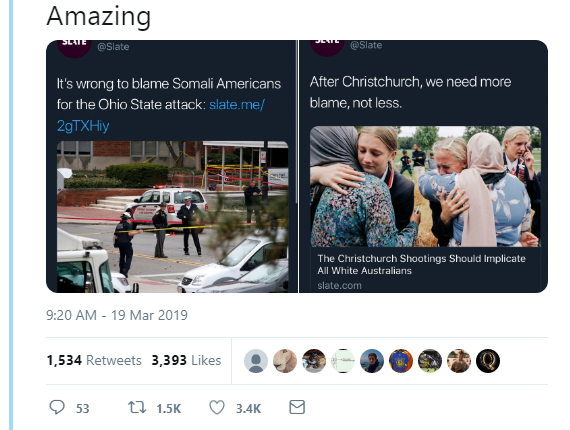 And in a statement.  Basically, it's racism to condemn an entire ethnic group based on the actions of a lone individual.  Except Whites. All Whites are evil racists by genetics and therefore bear the blood-guilt of all Whites who are evil racists by genetics.  What the Nazis said was spot on, they just aimed at the wrong demographic.  Likewise Jim Crow was onto something, but again had the wrong skin color.

It's racism and it's evil.  Those advocating for this socially acceptable racism would likely have done the same in Germany in the 1930s, or the Colonies in the 18th century.  Just not against whites. Those who would reject the worst elements of this nakedly obvious racism, but will still go along with the premise that you can at least assume some whites deserve condemnation because of their skin color, are the ones who might not have been Nazis, but they knew about those Jews nonetheless, and when the time came, turned a blind eye.  Christians leaders, I'm looking at you.

Don't expect to reason with the white liberals who make up the lion's share of those racists who call down wrath and hatred on all whites for the sins of all whites.  That's like reasoning with someone on a suicide-murder spree.  They are hellbent on killing themselves due to warped thinking and demonic influence, they're just going to take as many others with them as possible.

Email ThisBlogThis!Share to TwitterShare to FacebookShare to Pinterest
Labels: Bigotry for the Hip American, The evil the Left does, the Joy of Racism on the Left