J.K.Rowling and the leftist Wizard hunts 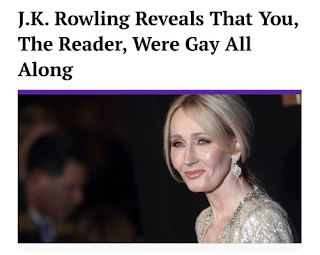 J.K. Rowling is nothing if not goofy.  As my sons - my resident Potter fans - once said, you could tell when she went from writing delightful children's stories to attempting to produce the epic of the ages.  Largely because she wrote within the fishbowl of Pottermania and the growing HP Inc. Corporation, her novels quickly became 'How to have a series end as bad as it looked like it would when Harry died to save humanity without killing our Brand Icon.'  As a result, the later novels are often bloated, tiring, convoluted and, quite frankly, dull.   The Goblet of Fire, per my sons, is the turning point where you can see the works pander more to the Corporate and fan base interests than the original story line.  My second oldest said it best when he said she ended up building a fantasy universe too large for her skills and talents to fill.

Anyhoo, as a fair children's book author, she nonetheless showed herself to be rather keen at tapping into the fanboy fan base culture at the dawn of the global Internet market.  Thanks to the GIM, even the most worthless piece of crap produced can rake in a hundred million dollars.  A little better than crap and you can have hundreds of millions in global revenues.  Get a name for yourself, and even your limpest efforts can produce sales that would have made The Beatles blush.

You must be careful, however.  Seeds planted in firm liberal soil today can choke you with leftist thorns tomorrow.  In those ancient of days, for example, before the ascension of the radical Left to global prominence, she had to contend with the possibility of backlash from the Conservative Christian front.  How did she handle this?  Easy.  She insisted, in addition to there ever and only being seven books about Harry Potter, that she was a down home Christian girl herself, and the final book was going to be awash in Christian themes.  She couldn't say how - that was secret.  If she spoke too much of her religion, it would give away the ending.

When the day of reckoning came, and Deathly Hallows was released, it was easy to see the rather blatant Christian imagery she utilized, from grave markers to the obvious death and resurrection motif.  That made all those Christian Potter fans say, "See!  Told ya!".  Mark Shea declared the Potter series a complete unpacking of the Passion Narratives.  Any criticism or curiosity about things like the series' consequentialist tendencies was met which charges of being an idiot or not spiritual enough.  This was, remember, the fantasy fan-boy fan base - Christian or otherwise - which Rowling seemed to understand so well.

Nonetheless, to avoid alienating the non-Christian/leftist fans who picked up on her more liberal themes of individualism, down with authority, and diversity based on liberal principles, she blurted out, a day or so after the book's release, that Dumbledore was, in fact, gay.  What?  Where was that ever said?  Did anyone reading the books ever conclude that?  But before those important Christian fans (of which there were many) lost faith in the gospel of Potter, she turned on her heals and insisted that Dumbledore never actually did anything physical about it.  Huh?  What does this even mean?

It meant nothing of course.  She was merely throwing out whatever to keep the sales going and the rather diverse global fan base happy.  She was finding ways to talk out of all sides of her mouth.  In those days, many of the Christians who were Potter fans (who would eventually become full-blown leftists) were not leftists yet.  And the thought of injecting homosexuality into kids' books would have caused problems.  But in the face of the growing anti-Christian sentiments of the leftist fan base, her constant appeals to this or that Christian theme or imagery was also bothersome.  She did what she had to do.

But over the years, her talents for just about anything - including writing - have come into serious question.  Her wading into the issues of the day shows that she spends about as much time thinking on the issues of the day as Lewis or Tolkien (the ones she was constantly compared to) likely did about whale gutting in the arctic.  But whereas Tolkien and Lewis were geniuses in their fields, as well as profound thinkers about other subjects such as mythology, religion and ethics and the field of fantasy literature, Rowling comes across as a rank amateur at best.

So now, in the wake of the Left's growing anti-"cis" White witch hunts, despite all attempts to be as diverse as possible, Rowling has been charged with not being diverse enough.  By that, the leftist lynch mob means Harry and the main characters were white and not having sweaty gay sex, and that's all they need to know.  To counter this juggernaut, Rowling has done what her meager abilities and insights on such topics allow, and that's come out with more incoherent ramblings.  She's tried to insist that in her world, all things gay and diversity dominate the Hogwarts universe - it's just a small microcosm of nasty cis-white people happened to be in the middle of the stories.

Ten years ago that would have flown, no matter how lame. The Left (and Christian fans) would have felt compelled to accept such dribble, even though they knew it was dribble.  But not now.  The leftist mob is now comfortable in its power and belief that, after a few more election cycles in America and abroad, it will finally have the power it wants to exterminate all who fail to conform to its demands.  Simply rolling out some weird 'trust me (wink, wink) it's there' won't cut it.  If you don't openly and loudly denounce Christians, Conservatives, Whites, Men, Heterosexuals, non-conforming Minorities, Americans and anyone else deemed an enemy of the Leftist State, while celebrating the latest leftist dogmas, you're in for it.  No amount of BS or wiggle room with stupid and transparent bilge will do.

I must admit, there's a bit of guilty pleasure I feel in watching the growing number of old and older liberals being consumed by the raging flames of the Millennial socialist and leftist wildfires.  These Frankenstein monsters the Left created are pure ideologues.  They will not put up with old word drool and politics as usual and talking points that score a few runs here or down the road.  They are armed with torches and swords, and have every intention of destroying anything and anyone that doesn't live up to their latest daily standards.  And that might even include each other.

The old Boomer liberals, or even leftists of my generation, might have been content with obvious BS that could advance the leftist agenda, but not these  youngsters.  They are pure dog soldiers for the Left.  You either brazenly fall into line with the Left 100% of the time, or it's the torch.  That will not only include any books, movies, shows or art deemed retroactively unacceptable, but it will also include those individuals and groups deemed past their sell by date and no longer of any use to the leftist Cause.
Posted by David Griffey at 7:00 AM