Courtesy of the New Prolife Catholic movement.  So apparently Rebecca Bratten Weiss posted this on her Twitter feed: 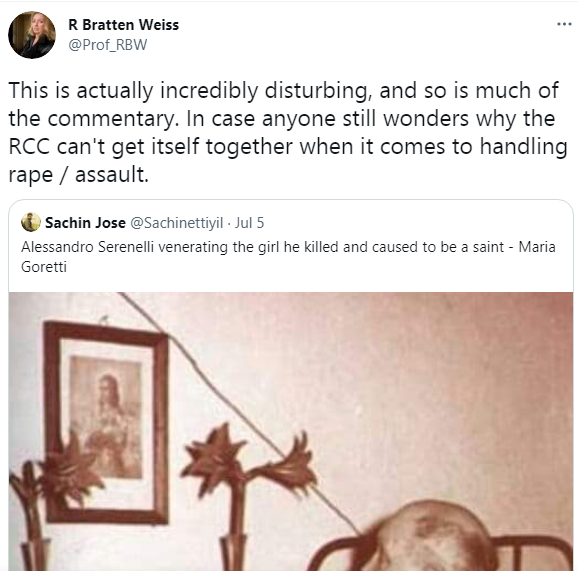 Wow.  There was a time when I imagined such an image would have been celebrated as an example of redemption and God's grace working in the worst of sinners, of which I am chief. Note how it is framed as disturbing, nothing at all about grace, mercy or redemption.  Furthermore, such a misplaced focus (apparently on things like forgiveness, mercy, redemption, and God's gracious healing of us sinners) is what makes the RCC look bad.

Wow.  I mean, wow.  Thank goodness it's only her, and nobody else taking such a disturbing view of Church teaching.  Correct?  Oh, turns out here are some comments on this thread: 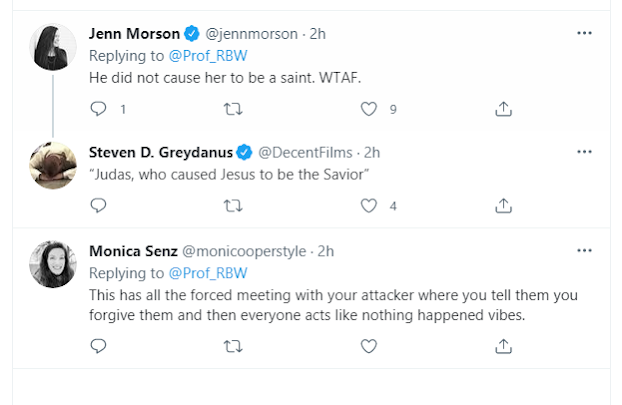 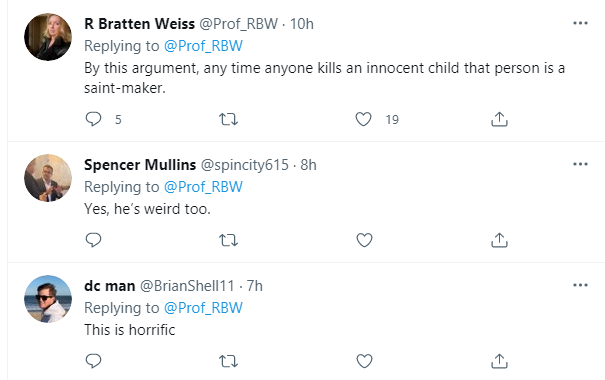 Exactly how this fits into the emerging notion on the left that judgmentalism is all the rage, but mercy and forgiveness are just stealth white supremacy and therefore to be rejected, their banter doesn't make clear.  It's enough that they don't see redemptive grace or reconciliation, but rather an individual who should not be allowed to move past his sins, and the idea that no saint should be venerated by ... a sinner?

Note the good Catholic film critic and deacon Steven Greydanus throws his two cents worth of contempt for such an image of redemption and reconciliation into the mix.  Well done deacon.  I notice how one trick of shifting Christian goalposts around rests on semantic nitpicking of the type the good deacon himself tried to condemn recently.  God makes saints of course, the individual who wrote that in a likelihood understand this.  But the important thing should be the story of redemption and unbelievable level of God's grace, not 'quibbling over semantics, which is the definition of what Deacon and company are doing'.

For what it's worth, this is simply following a growing trend in which we learn almost anything and everything from the last thousand years of Christianity and the Christian West - and possibly before - can be assumed to be false, the result of bigotry, racism, colonialism, misogyny, or any one of a million different demographic defects.

For instance, maybe in heaven there can be forgiveness for a growing list of unpardonable sins such as rape, racism or slavery in America, but on this side of the eternal, depending on your group identity, your arse belongs to the Left and whatever privileged demographic group is holding the rope at the moment.

As God is my witness, I sincerely believe there is no heresy, blasphemy, intrinsic evil, or sin that cries out to heaven for vengeance that believers - Catholics included - who have thrown their lots in with the Left will either embrace, defend, or at best ignore.  And if it means throwing core Christian doctrine and virtue under the bus, or interpreting such things as God's grace or redemption only through the prism of leftwing dogma, apparently that's just fine.