The few, the faithful, the saved 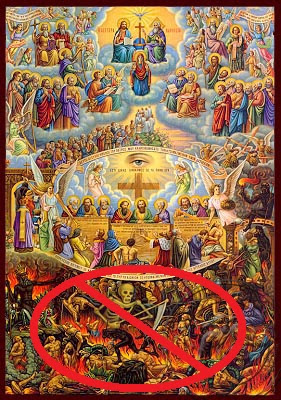 For those who think about it, an implicit universalism seems to be common.  Sometimes it's an explicit universalism.  This isn't something new or 21st Century.  There have always been some who failed to square a loving God with some eternal separation from that same loving God.  But in recent generations, visions of hellfire and damnation have clearly diminished as more and more Christians, consciously or otherwise, accept a somewhat secular understanding of religion and a worldly understanding of creation.

In this setting it appears quite common to assume, without much thought, that most everyone is guaranteed to pass through the light after we shuffle off our mortal coils.  Much discussion, when it comes up, is around how many are saved - everyone or just mostly everyone?  I've seen that discussion on Catholics sties and outlets many times, and it's almost always around the assumption that it's a matter of how few, if any, will fail to be joined with God in the New Jerusalem.

Here's what I've noticed, for what it's worth.  Last year for Holy Week I did a quick series on the seven churches of Revelation.  No particular reason, it just came to my mind.  One thing that hit me was that out of the seven churches, only two were given high praise and a pass.  The other five were given warnings.  Get with the program or else.  Yes, we all know the churches at Sardis and Laodicea were the pits and got stern warnings to shape up or pay the piper.

The fact is, however, three of the others got the same.  Even if they had elements that were praiseworthy, including suffering for the Faith, they still ended getting the same stern warnings.  No amount of praiseworthy works in those churches made them immune from the same warnings that everyone's favorite loser churches got.

In other words, our walk with God and God's appraisal of us is not based on trade and barter.  We don't get to stand in front of God and say, "Sure, I didn't do this or that, but I was awesome over here."  We're expected to follow God and do what we're supposed to do.  If we don't, see the warnings. Even if we go so far as being willing to suffer for the Faith, that doesn't balance out ignoring the teachings of Christ over here or over there.  It's sort of an all or nothing package.

And that got me to thinking, as I am wont to do.  I reflect on the modern obsession with 'does everyone but Hitler get saved or is it everyone saved?'  Much of the scriptural basis for this comes from two key passages in the New Testament, beyond some philosophical wrangling over love and punishment and eternal fates.  The main verses appealed to are 2 Peter 3.9 and 1 Timothy 2.4.  Some have also appealed to Ezekiel 18.23.   The gist is that God wants everyone to be saved and come to repentance.

Here's something I noticed when I reflect on my former colleagues who tended to cleave unto the liberal side of theology, who often embraced this implicit/explicit universalism. I noticed that in most cases with most modern topics, the Bible, even the New Testament, is usually confined to Jesus and His teachings (in recent years, mostly Matthew 25).  That's where we learn God is our good buddy, it's all about love, no condemning of sinners, no condemning of the world, because Jesus says so. Be a swell person and that's all we need for righteousness.

And yet when it comes to scriptural references to buttress universalism, it's almost always the above passages in the New Testament.  Almost never is it Jesus, unless you want to parse something like Matthew 23.37.  Why is that?  Why do they almost always appeal to Jesus as the great lover of love and forgiveness and mercy and nothing else where our sex lives or other religions are concerned?  It's all tolerance and inclusion when you read Jesus.  But when it comes to universalism, we rush over to the rest of the New Testament as our go to reference?

I can't help but guess it's for one simple reason.  If you look at the Gospels, you'll notice when Jesus does talk about things like paths to life or final judgments, if numbers or amounts are mentioned, those not cast into the outer darkness with weeping and gnashing of teeth, or those not going along the path leading to destruction, tend to be described as 'few.'  You want bad results of standing before our eternal judge?  That's where you get terms like 'many', 'most' and similar

In fact, one of the sometimes glossed over parts of Jesus' appearance at the synagogue in Luke 4 is  how he invokes instances in the lives of Elisha and Elijah when discussing His return to His own home.  He notes that out of everyone, those OT prophets reached out to only two individuals, the widow of Zarephath and Naaman the Syrian, during times of great famine and suffering.  Which, if you think on it, is often the proportions given in the entire Old Testament.

Like it or not, my Old Testament professor in seminary had it right.  The Bible, for want of a better phrase, is usually a minority witness.  That is, those who cling to God and stay faithful are almost always portrayed as the minority.  Sometimes, as in Noah, it's literally one family in the whole world who stays faithful and escapes destruction.

Or in the Wilderness, it's only two spies who keep the faith.  Or there may have been seven thousand who did not bow to Baal, but there were only seven thousand, not the majority.  And on it goes.  You get the point.  The 'story' of the Bible is often of the majority falling away and bowing before the Golden Calf when only a 'few' remain faithful and escape God's judgment and, yes, punishment.

Jesus invokes this proportion when He chastises the synagogue in Nazareth.  It also underpins His continual teaching that many may be called, but few are chosen.  That the path to destruction is where many go, versus the few who find and traverse the narrow path that leads to life.  In fact, I might say if you're looking for evidence that everyone gets to heaven, the last place you want to go is Jesus.  Which might be why those who make that argument, in this case at least, prefer the rest of the NT to what Jesus has to say on the matter.

None of this is to say hellfire awaits almost everyone but 140,000.  I'm not even haggling over what Jesus means by path to destruction or weeping and gnashing of teeth.  Does it mean some middle ground where people get purged ala purgatory before being saved for eternity? Does it mean burning in Hell for eternity?  Is it oblivion and eternal destruction, but no real eternal suffering?  Is it the least versus most in the Kingdom of Heaven, where the unhappy 'many' who take the wide path end up with a room next to a noisy ice machine for all eternity?

That's not what I'm focused on.  In fact, I think when we approach it that way - just how are we really all saved despite how we live or what we have to say about God - we're already missing the point.  Sort of like my dad asking me to do chores and then wondering what will happen if I don't.  The point isn't wondering if I'll be grounded, spanked or just have the car keys taken away for the weekend.  The point is to do the chores because my dad told me to.  Since I love and respect my dad, that should be my response, not 'how little might I be punished if I ignore him?'.

The point isn't to really parse what is meant by destruction or outer darkness, as much as it should be something we don't want no matter what they mean.  Not because it might be really bad, but because it means we've fallen from what God wanted in the first place.

But such warnings are omnipresent enough to warrant our attention.  The tendency of Jesus to describe those taking the path to life as the minority, when added to the Scriptural story of most people rebelling or falling away to their punishment and regret, suggests asking how many are saved might mean an answer we don't want.  It also might mean we need to rethink how we've packaged the Faith in recent generations.

The tendency of  modern churches to quickly modify, adapt, change and even surrender before the world is at least partially grounded in a diminished belief that there are any real consequences to getting it wrong.  A focus on just how everyone will get a blue ribbon when we die has made it easy to shrug off any concern about missing the mark.

Yet that is something the churches in Revelation learned.  It's important not to get it wrong, because warnings of dire consequences are given us all, no matter how much we get right.  And if Jesus is to be believed, it won't be the majority who end up in the path to life, skipping along no matter what since everyone gets the prize at the end.

In fact, it might be some sad self fulfilling prophecy that our efforts to accommodate and adjust and modify the historical revelation might just end up leading to that very vision set out in the scriptures.  That is, no matter what God does, the majority will find ways to ignore Him and walk the other way.  Instead of repenting, the majority will instead curse God when the time comes.  Which would then suggest a reading of the Bible as minority witness might be the most accurate way to read the numerical witness in the many mansions of the Kingdom.

Again, I'm not saying the majority are going to burn in hell!  Or heaven is an exclusive club reserved for everyone name Dave only (and those he loves).  Nor am I quibbling over what many or few means.  After all, 51% of the human race could technically be many or most, and still let 49% of humanity be saved.  I think all of that is going the wrong direction with the topic.

I think both the history of Christian doctrine and the scriptural revelations themselves show that whatever the case, when God says X, the majority of the world will nonetheless reject X.  And of those who God entrusts to deliver the message of X, the majority will choose to abandon X when the going gets tough.  And sometimes that doesn't mean failing to suffer for the faith, as several churches in Revelation were willing to do.  Rather it can just be giving in to the old temptations and sins of immorality and false teachings.  Which, if we try to twist it all to say nothing matters since everyone ends up on the path to life in the first place, might be the worst teaching of all to allow.