Not sure what to take from this

Except to don my merry secularist and call it a cosmic coincidence.  So I still check Facebook once in a while to see what's going on with old acquaintances.  One of my classmates from days of yore had this on her page: 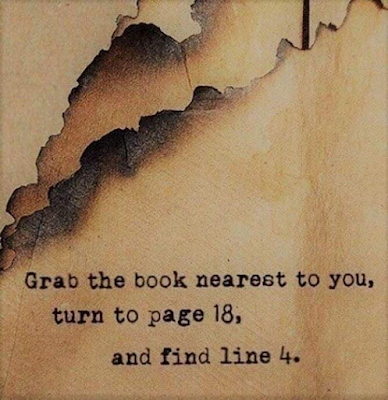 I almost never waste my time with these things, but since I was just getting going on the day and was getting our youngest up for school, I thought I'd do it on a lark.

As it happened, he's getting ready to read The Merchant of Venice as his next lit assignment, so that was right here on my desk.  I know, that was cruel of me to assign that.  Him being in seventh grade and all.  I could have chosen Macbeth or Hamlet, but he knows those to well.  I wanted to challenge him with a Shakespeare yarn he's unfamiliar with.

It's one of the Signet Classics versions, BTW, with academic notes and writes ups, plus vocabulary and footnotes to help the modern reader though some of the terms and phrases that seem strange to us today.  I recommend those versions whenever possible.

Anyway, I picked up the book, and turned to page 18.  Now, as a qualifier, let me say I skipped the intro as it was numbered with Roman numerals, as such intros often are.  I went to the pages numbered in Arabic numerals, since that was used in the above image, which began with the play proper.  From there, I went to the eighteenth page.  Then I read down to line four, and this is what it said:

"The Devil can cite Scripture for his purpose."

Wow.  Given my musings on salvation and getting hung up on numbers that I posted today, I thought that was a bit ... odd.  Certainly odd timing.  It also made me wonder.  Funny, we dismiss such things today in a very secular way.  Dumb luck.  Cosmic coincidence.  Just weird that I posted that and suddenly this turned up in a goofy Internet exercise.  And yet there was a time in ages past when such a thing would make even the most hardened theologian rub his chin and ponder.

Not that everything has to be demons and angels doing it.  In even the most superstitious age, people were able to discern between the natural and the supernatural.  It's just sometimes I think we've moved the bar too far in the direction opposite of superstition.

With that said, I'm not going to delete the post.  Nor am I going to assume it must  be confirmation that all those other people are misusing Scripture.  I'll likely have a good chuckle as I have now, and then move on.   But it is worth noting that I'm doing this because I've been very well trained by our secular age.  I've been taught to hold the bar very high indeed for any idea that something could be nothing other than natural cause or mere coincidence.

Posted by David Griffey at 9:28 AM