Three of our sons are like us, a bit on the quiet side, to varying degrees introverted.  They're hard working, do well with what they try, and have varying levels of confidence in themselves.  On the whole, however, they are not your A personality types.

Then there's our third oldest son. Someone had to dig deep into the gene pool to find him.  A triple-A personality all the way, he exudes confidence and self-assurance in a way I can't imagine.  A young man of snap decisions and decisiveness , he doesn't flinch when confronted with an obstacle dropped in front of him.

So we have to park the four cars we have in our rather small, uphill driveway over winter.  That frees up the street to be plowed when needed.  This requires a certain level of skill, pulling our second son's Honda Fit behind our van, and my third oldest parking his Honda Civic behind my wife's Civic.  Even in the best of times, we imagined his car would hang over the sidewalk because there just isn't enough room to fit both cars of the same size.

Or so we thought.  But this is him, and he has made his parking finesse almost a spectator sport in these parts, as he often does with most things.  Time and again he parks so close to my wife's car that we can't believe it.

Then came Saturday morning, after he came home late Friday night after closing the restaurant.  We went out to take some items to the recycling center.  He told me to look at his parking job this time.  I did, and I couldn't believe it.  Pictures don't do it justice, but here is my twelve year old trying to squeeze his small finger down to the space between the two bumpers - and failing I might add: 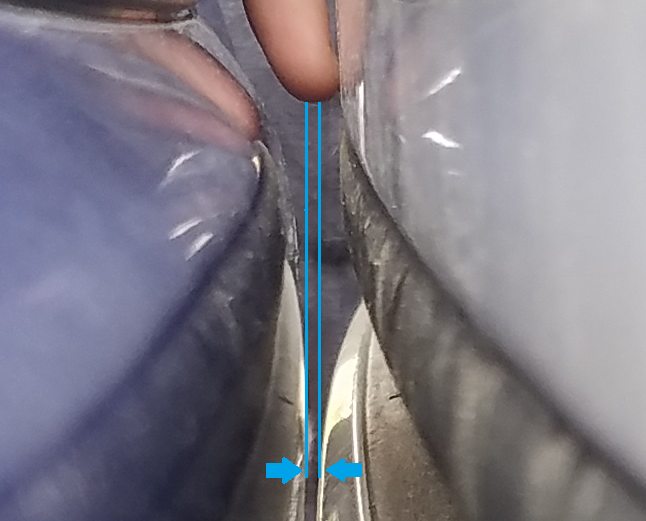 You see that?  I drew the blue lines to show the space between the bumpers compared to our son's small fingertip.  We tried to get a tape measure or ruler down there, but none would fit. He literally got it that close, at night, uphill.  Of course he grinned and did his Chef's Kiss, as he often does.

The four boys compliment each other well, often playing off the strengths and weaknesses each brings to the table.  When there have been times of emergency, they've typically designated tasks according to what each is best at.  But the others agree that when it comes to sudden challenges and obstacles, the one they automatically defer to is our third son every time.