Understanding why some are parsing Putin in one easy image

I know.  When Putin first invaded Ukraine, some nuts ran out and said how awesome he was and he's a genius.  That was to score points against Biden mostly. It was stupid and wrong.  Especially since Putin's invasion has been anything but genius.  It's also wrong to put a positive spin on such an atrocious action as invading a neighboring country.

Nonetheless, with that said, it doesn't mean we shouldn't be looking at this from a distance to see what is happening.  If I don't like folks praising Putin, I like even less those saying we all must scream 'It's the Nazi fascists all over again and we must do anything or  you love Hitler!'  That rush to push me down a road nobody wants to define has me as bothered as anyone putting an Einstein label around Putin.

One of the things several have pointed out is Putin's stance on the LGBTQ movement.  To the Left, that's one more piece of evidence that he's evil Hitler redux.  Even to those who oppose the LGBTQ movement, his methods and policies have been cringe worthy, brining back visions of gulags and labor camps dancing in our heads.

Nonetheless, allow me to explain why we need to be careful.  Here is a single image that says it all: 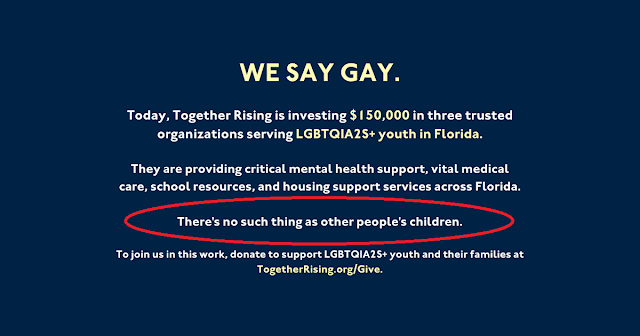 It's from a group rallying support against Florida's parental rights bill that prevents sex lessons for students under fourth grade.  Derogatorily named the Don't Say Gay bill by the gay rights movement (a label universally accepted by the LGBTQ partners in the global press), it stops what we were told would never happen, and that's teaching kids about genitals and sex urges in grades where kids are too young to pack their own lunches.

Note the circled part (I did that).  See that?  There is no such thing as other people's kids.  Sorry Left, but your continued insistence that anyone right of center is a fascist masks the fact that most of what the Left wants is nothing but a fascist state.  That's where the LGBTQ movement is going, and the Left is helping it.

Not because I think the Left cares a rip for gays or transgenders any more than it does blacks or women.  It just sees the LBGTQ movement as invulnerable.  Even churches and faith leaders cower before it, begging mercy for doing anything but celebrating all things non-heterosexual and post-gender, and breaking the back of reality to accommodate this movement in all ways but the most trivial (that is, marriage is still technically for men and women, but civil unions can rock it awesome style!).

Knowing and counting on this, the Left realizes the LGBTQ can openly say we're coming for your kids.  That we will soon be teaching elementary school kids, the way we now teach middle schoolers, the joys of oral sex or why using science to change your body is the most praiseworthy action a person can take.  The Left knows the LGBTQ movement can do this, admit they are doing it, and almost everyone will turn their heads and wish it would go away, if they do anything at all.

Such faith leaders and shakers as Ms. Eden won't stop it.  They won't speak to it.  After all, where are the Catholic leaders about this issue?  The Evangelical leaders?  The Orthodox leaders?  The establishment conservative leaders?  Anyone?  Bueller?  If anything they will attack anyone who tries to stop this as some half-baked gay basher who wants all transgender kids murdered because they hate black people.

If such voices speak to it at all, they'll make a quick and slick statement about men and women, immediately followed by bemoaning the first two thousand years of reprehensible Christians terrorizing the always beautiful people in the ever expanding LGBTQ++++ movement.  They'll then reach out and insist there's nothing real and nothing to get hung about, we only want love and love and all you need is love and walruses and blackbirds and raccoons. Again, reserving true wrath for anyone trying to take a stand against this, especially if they're white.

So when you see this on our shores, you can get why some are saying Putin might be a monster.  He is certainly the villain here and needs defeated.  But it might be worth our while to see what Putin was likely pandering to.  Whether he personally cares about stopping the gay based steamroller or not, I don't know. But he points to an issue that needs addressed.

At the end of the day, we're going to have to admit an ugly truth about our particular era of history. Many bemoaning the thousands killed in Ukraine more than happily accept the tens of millions who have died of AIDS.  And, based on everything, are intent on continuing to do so.  Perhaps the smart move is to call out both atrocities equally, as well as those who wail over the thousands but have learned to stop worrying and almost celebrate their tens of millions.