Is to reject behaviors and attitudes taught by the modern Left.  Case in point: 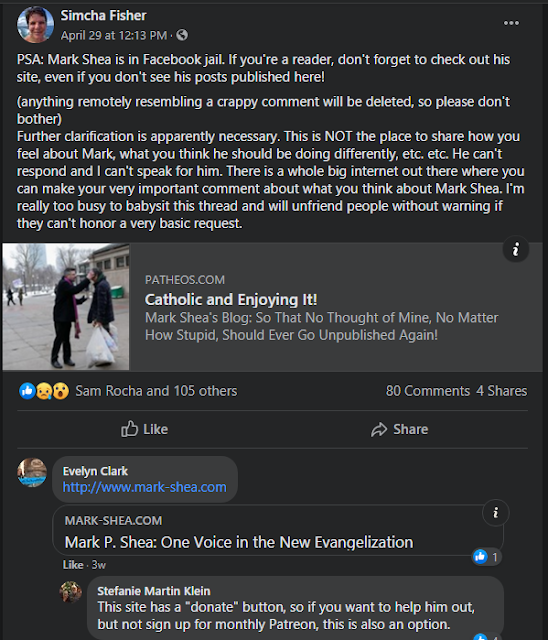 This was brought to my attention over at Facebook.  Apparently Mark Shea has been banned or somehow limited from Facebook for a time, times and half a time.  Why?  I don't know, though I can imagine.  The level of vitriol, calumny and sometimes outright falsehoods wrapped in personal attacks and character assassination that define his social media presence are a possibility.  Or perhaps he posted something about historical Christianity.  In today's world, you never know what will invoke the glorious censorship.

Now it needs to be pointed out that Mark cheered when it was announced that Facebook, YouTube and other internet media giants would ban and censor alt-right, racist, white supremacist and other hate groups from their sites.  A few tried to explain to Mark that this is too vaguely defined today, and could be used to broaden just who belongs under such labels as 'hate group'.  Mark, naturally, mocked such appeals to logic and reality.  So you never know.  In this little dose of poetic justice perhaps he'll learn a lesson.

Nonetheless, I was struck by Ms. Fisher's appeal to people not to critique Mark or criticize him.  After all, he can't defend himself!  This is Mark.  A man who, snug and safe behind his 'ban' key, gladly lets fly with name calling, personal attacks, false accusations, and near slanderous assaults against anyone and everyone who doesn't snap to and align with Mark's partisan opinions.

Heck, this is Simcha Fischer who, in a heated debate about Harambe the gorilla, called upon her followers to descend on a young lawyer running for office and find ways to ruin the young woman's career path.  This after she wrongly accused the young woman of - you guessed it - being a racist.  It isn't as if the genteel Ms. Fisher is a stranger to inflamed rhetoric and her own brand of expletive laden broadsides.

And yet, please be nice to Mark.  Mark can't defend himself.  Like all those Mark would ban for not aligning themselves to his agendas, Mark is stuck being unable to respond to those who would call him out on this Facebook post. You know, the post-modern 'do unto others so they can't do unto me.'

This is one of many weapons in the modern Left's arsenal.  A naked hypocrisy that allows progressives to hurl nuclear missile level insults, accusations, attacks and other slanders aimed at non-conformists, only to collapse and melt in a pool of tears and urine when someone dares say they might be wrong.  Offense and outrage erupt at the person who defends himself against being called a rapist, racist, Nazi, baby killer or anything else.  In fact, in a hilarious twist of reality, you can be called those things by a progressive for daring to insist you aren't those things.

And yet, be nice.  Where liberalism is concerned, it's always about fair play and kindness.  When applied to those to the left of center of course. It's the mentality of a child who thinks he or she can do whatever without consequence, and everyone else must bend to the child's will.  It's the child, before good parenting has taught him what right and wrong are and aren't.  Yet this is what our society has labored for decades to get as many Americans as possible to embrace.

Oh, and for the record, and for Ms. Fisher's info, there is almost nowhere on the Internet where you can respond to Mark and expect to reach him.  He is free to ignore emails or other attempts to reach out to him.  Even those who have reached out by phone report hearing not a peep in response when they have tried to reason with him.  He seems to visit no other blogs anymore where he might have to confront those he attacks.  When he does - on the rarest of occasion - comment on another blog, it's often in the form of a troll, firing off a one-shot insult and then appearing to retreat and refusing to debate.  Instead he apparently stays on his blog, FB page and other outlets where he surrounds himself by like-thinkers on the Left who join the tribalist hate and calumny, and bans those who dare challenge him or them.  Always a dangerous tendency in anything, much less Christian ministry; having much more in common with Waco or Guyana than Jerusalem or Rome.

So no, there are scant few outlets for people who want to pull Mark back from the brink. And since Mark and his companions on the Catholic Left continue to be referenced and even given kudos by Catholics in high places and low, rather than than being the target of any needed interventions, I thought I would, per Simcha, make my thoughts known the only way I can.  Just saying.

UPDATE:  I've been informed that no sooner do I post this than Mark Shea is leaving Patheos and starting a new blog.  This is the link.  He says it will not be what his Patheos blog has been.  That is, it will not be centered around attacking and assailing conservatives, Republicans, traditionalists, white Christians and the like.  It will be about seeking Jesus.  If he gets back to his Christian roots, great.  Apologies and repentance would be nice, but if he simply stops the direction he's been going - one that has gotten far worse since he moved to Patheos all those years ago - that will be something.  I post a link to his new blog in good faith that he means what he writes, even if as he does so he takes parting shots at the same Trump/Conservative side he insists won't be his target henceforth.  So good faith link.  With God, they say, all things are possible.  We'll see.

UPDATE II: I should say I hope he changes, but how much of it is based merely on his politics - which many supporters insist - and how much based on deeper issues is something that will have to play out.  I won't support his new blog any more than I do his current one if he doesn't change.  But when he calls our economic crisis 'Trump's Depression' because of the problem created by the solution Mark demands under threat of being accused of wanting to kill people (all the deaths he blames on Trump), it suggests some serious issues on the surface, if not deep down.  Again, in good faith I will visit, and if he changes, repents and preaches the Gospel, I'll be happy to support his new endeavor.  If not, I will not visit there and, quite frankly, will stop dealing with it or him altogether.
Posted by David Griffey at 5:00 AM