Friday Frivolity: The game of games 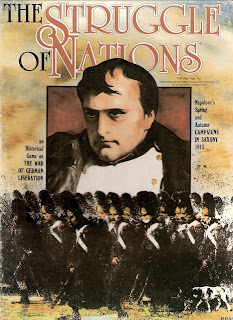 When I was but a lad, I spent a few years investing in war games.  It first began in middle school, when I became enraptured with Napoleonic history.  A teacher we bought our house from had left a small library, and in the stack of books was an encyclopedia set for middle schoolers.  For some reason, the article on Napoleon jumped out at me.  Since there was scant little a middle schooler could do to immerse himself in the period other than read, I found the next best thing.  That thing was the first intro war game for war gamers the world over: RISK.

In college and shortly after, I began moving into the classic war games of various companies, most notably Avalon Hill.  The famous 'chit' games became an obsession with me.  Since most who ran in my circles couldn't care less about such a pastime, I made sure to invest in games with high solitaire capabilities.

One year, while browsing a hobby store that carried such games, I stumbled across what some have called one of the most complex (complicated) games of all time.  The box even had a warning printed on the outside: If you don't know war games, don't buy this game. It might as well have said 'if you've never played this game before, don't buy this game.'  I swear the instructions acted as if you had familiarity with not only war games in general, but this one in particular.

The game is call The Struggle of Nations.  Designed by Avalon Hill's Napoleonic guru Kevin Zucker, it is a 'historical simulation' that reproduces Napoleon's failed Saxony campaign of 1813.  Much of the criticism of the game revolved around its claim to be a historical simulation (in which you expect the history to more or less be repeated) and the game side, allowing flexibility enough for either player to win in a variety of ways.  Nonetheless, it was hailed as a great game overall, and today I still find the occasional nod to it being a fine labor of love for the creator.

So I took it home, opened the box, and read.  And 30 years later, I continued to do just that.  Every so often, a few years here or there, I would get the box, open it up, and read the instructions. They remind me of that type of manual that goes something like this: How to Fix an Automatic Transmission in Four Easy Steps; Step One: Remove the engine. Though I've cracked most other games (though not all), this one simply appeared beyond my reach. 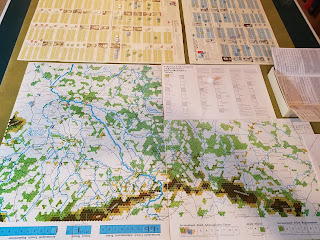 Well, enter quarantine and Covid-19.  More or less sequestered in our home, owing to my elderly Mom's presence and our desire to be careful for her sake if nothing else, we found ourselves with a little extra time.  Not much, mind you.  I stay home and take care of my Mom and also homeschool our youngest son.  I'm also default goto to handle anything and everything that comes our family's way.  Personally I'm glad to do so.  It's not easy tending to the homestead, but at the end of every day I can't help but wonder: What the hell were women thinking?

Anyway, because we let our older sons stay home in order to mitigate expenses and dodge debt to get through college, and because we already homeschool and are caregivers for my Mom, the biggest change has been my wife working from home.  Apart from that, our lives haven't really changed.  That means, we haven't had the metric ton of extra time I hear others talk about.  But we have had a little more time.

And into that, we've poured a few extra pastimes we've not had time for in recent years.  One was this.  Utilizing my third son - who is our resident game guru - we sat down and, over the course of about three weeks, have almost made it through three turns.

Like most games that try to reenact the Napoleonic era, it's big on logistics and communications.  That was a key issue in those days.  It was 1813, and they didn't even have smartphones yet.  So many things went wrong that wouldn't go wrong today, at least as we know going wrong.  Therefore, your average Napoleonic game will have random factors to account for being able to do things, again simulating the wide range of obstacles that could get in the way of an early 19th century commander.

For its part, The Struggle of Nations is what so many games from those days tried to be.  It's a game that lets the historical facts drive the action.  It covers a vast scale (the regions around Saxony, including Bohemia, Silesia and Brandenburg), and yet manages to account for divisional level forces.  True, the combat takes a back seat to logistics.  Much of the game revolves around supplying your forces and avoiding attrition.  That is, keeping your forces from dropping off or starving while trying to get them from point A to point B.  At times, combat seems almost an afterthought.

We're not all the way through.  There are still several points we're trying to hammer out.  It takes the two of us bending all of our thinking to crack this thing, but it's starting to appear possible.  Because it's long out of print, there aren't any forums you can run to in order to ask questions.  Perhaps we're doing it wrong.  In any event, it's proved to be enjoyable with just what we've accomplished so far.

And it's educational.  Like many such games from that period, much background information is provided, with quotes and sections lifted from various historians and scholarly sources trying to unpack the events and the culture of the game.  Comparing it to the wasteland that is historical studies today would be grossly unfair.  I would say that even compared to better eras of historical education, the factual information provided in these games would give a university scholar a run for his or her money.  Some contributors were actual scholars and historians in their own right (and this isn't counting those regular wonders of historical research for the gaming industry that came from Osprey books).

I doubt such historical research and backgrounds would cut it today.  It required too much honesty and appraisal of the actual events and those involved, rather than whatever agenda it would have to bow to today.  Beyond that, like many such games, it also contained an impressive bibliography and even a discography, recommending a - then - recent recording of Bach's Passions  - in 28 boxed sets!

Such was that time in gaming history.  The game, so far, has lived up to the hype.  The tension in all war games between realism and playability - especially so that the outcome would not be predetermined every time you play - has always been there. So far, it doesn't look like the French will win that often.  But the important thing is that by the time you're finished, you will have stretched your mind a bit, and perhaps even learned a little about the time period the game represents.

Oh, and kudos to the game for suggesting players read up on the actual historical events before playing.  Again, not the only such game in the genre to do so.  But nice to see just the same.  For my part, I consulted my goto text on the subject, the late David Chandler's definitive text The Campaigns of Napoleon.  If that doesn't help give a bit of background worthy of the game, nothing will.
Posted by David Griffey at 7:00 AM