It was 75 years ago today 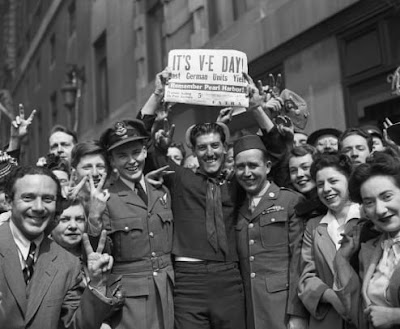 As the years drone on, the memories of this era, when America shined supreme as a beacon of hope and freedom for the world, will fade.  This period in history is as far back to youngsters today as WWI was to my generation.  By the late 80s and 90s, little was said about that war to end all wars.  We knew of it mostly from Snoopy's fights with the Red Baron.  As a history buff, I knew more than than the social narrative would suggest.  But it was no thanks to popular culture or the press.  In the 1980s, when the 70th anniversary of WWI would be ticking by, most of the mass media was obsessed with all those events from 20 year ago today, when Sgt. Pepper taught the band to play.

So it is now.  As a growing surge of younger Americans are convinced that America is and always has been a nation of racism, genocide and slavery, don't expect them to do the heavy lifting to see if anything is worth knowing from America's past.  The press today, on CBS, chose to do a segment on women in the Army Air Corps flying as test pilots.  No real mention of the overall war or sacrifice beyond the date.  Emphasis on the demographic group of the day.  Checklist finished.

In any event, Donald McClarey, as can be expected, has a fine post on some nuts and bolts of this historic event that is all too soon losing its significance.
Posted by David Griffey at 8:35 AM

Email ThisBlogThis!Share to TwitterShare to FacebookShare to Pinterest
Labels: History, The Decline and Fall of the American Dream, What We Learn from History