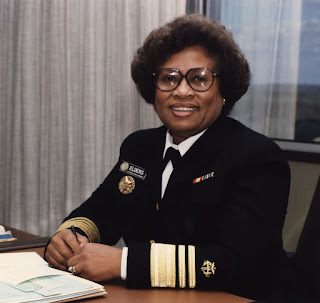 Yes, her.  She was the first black [check] woman [check] to be Surgeon General.  Appointed by Bill Clinton, she was a walking gaffe machine.  At least for back in the day, when we still believed in boys and girls and thought  handing condoms to children might not be a good thing.  Today she would no doubt receive prestigious awards for her keen insights.

But back then, she became a burden for the Clinton administration, even with a sympathetic media trying to help.  Things came to a head when, during a congressional hearing, she made a shocking claim about AIDS and Cancer research funding.  People were starting to ask why so much time and money was going to AIDS research when cancer and heart disease kill so many more in a year.  Her answer?  Easy.  Heart disease and cancer tend to kill the elderly who have already lived their lives.  AIDS hits the young people who have yet to live.

Wow.  I remember the storms of outrage.  Even Democrats and liberals I knew ran for cover.  Attempts were made to mitigate the impact of what she said, but to no avail.  You just couldn't gloss over the almost calculated, Orwellian sound to her 'Old Major has just got to go' statement.  Conservatives had her by the throat.  Her days were numbered.

You can see where this is going. More and more I'm hearing conservatives talk about Covid-19 and the fact that it mainly impacts the elderly and the medically compromised.  And who do they sound like when they bring this up?  Why, Ms. Joycelyn Elders, that's who.  I heard Rush Limbaugh talking about it in a way that was almost syllable to syllable what she said.  Others on the internet are picking up on this, even going so far as saying the elderly are going to die anyway, why hurt our businesses and incomes to stop the inevitable?

I know, there will be people rush in an explain why this is different.  It isn't.  And it's a glaring warning about the Faithful cleaving too closely to a secular movement, conservative, liberal or otherwise.  If conservatives were rightly outraged at the idea that stopping AIDS is more important than cancer or heart disease research because those impact the elderly, then don't turn on a dime and use the same argument when it comes to salvaging the economy and opening up businesses.  Just don't.
Posted by David Griffey at 5:51 AM

Email ThisBlogThis!Share to TwitterShare to FacebookShare to Pinterest
Labels: Culture of Death, When the Right is Wrong