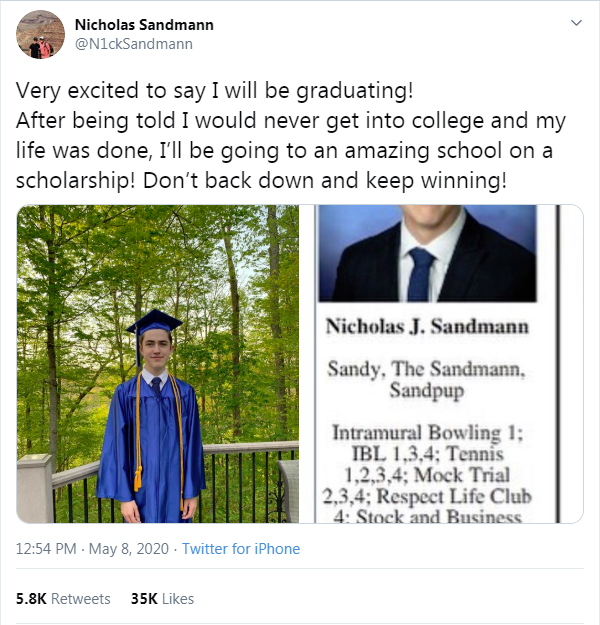 Nick Sandmann, if you remember, was in the center of the firestorm that ignited at a high school field trip.  He was seen standing, smiling as an American Indian activist got into his face.  Being white, he was immediately accused of being a racist Nazi who was terrorizing minorities.  Having a MAGA hat, this only solidified the stereotype.  The Indian activist initially stated that he was part of a group of Native Americans minding their own business when Sandmann and other racist students assailed them.  Being Native American, he was immediately believed. In our day and age, all concepts of guilt and innocence and privilege being judged purely by one's skin color, gender, sexual orientation, nationality, religion, or a host of other demographic labels.

With that heaping pile of racism and bigotry established, the press swung into action.  Sandmann was attacked by both the press and social media.   It reached fever pitches as attempts to destroy him and his white classmates hit full swing.  Various "pro-life" activists decried Sandmann and called him out as the racist white supremacist Trump supporter that he was.  From celebrities offering oral sex to anyone who would beat Sandmann within an inch of his life, to activists calling on colleges to deny Sandmann admittance, to the Catholic diocese that Sandmann's Catholic school belonged to threatening expulsion, things seemed pretty bleak.

But the thing about social media is social media.  And in an age of a million cell phones ready to fly at a moment's notice, it didn't take long to find other cell phone videos of the event.  These videos were more comprehensive and covered the whole event.  They showed a radially different story than the selectively edited video initially released or the initial accounts.

As facts came together, it turned out the Indian activist was just that.  He had just come from attempting to disrupt a Catholic gathering at a church.  Then he - not Sandmann or the students - approached the gathered teens and got in their face.  Meanwhile, a group of black activists (whose group would later be implicated in a string of antisemitic killings and attacks in NYC), were spewing racist and antisemetic and anti-gay rhetoric.  You don't get worse for the press's narrative than that.

All of this didn't turn things around.  When it looked like the initial story was bunk, the press did what it often does, and that's try to dig up any dirt at all on Sandmann and the white students at the school to validate their media lynch mob.  They found other white students in the area to see if they may have said racist things.  They dug up old school photos for any evidence of racist imagery or rhetoric.  Some Catholic leaders still said that having worn a MAGA hat, Sandmann and the students deserved what they get.

Some on social media sort of apologized, but usually in a very qualified way.  David Hogg mocked Sandmann for being upset about the confirmed death and bomb threats against him and his school.  Others mocked him for similar reasons as Hogg, or said guilty or not, his MAGA hat more than means he deserved what he got.

Well, after all this, and after seeing glimpses of the nation the modern Left wants - violence, racism, bigotry, oppression, discrimination in the name of fealty to the Left - Mr. Sandmann has graduated.  He has filed lawsuits, and if there is any justice, he will win.  A real canary in the coal mine, he has exposed just what type of nation the Left is delivering.

Nonetheless, showing a mettle that many wouldn't possess, he's made it through school, no thanks to his own Catholic leaders who were more than happy to throw him under the bus.  It looks like he's off to college, the attempt to call for a nationwide college boycott of him having failed.  No, it won't be Harvard.  Harvard is reserved for subpar students like Hogg who sing the gospel of Marxist leftism.  But I'm sure young Mr. Sandmann do fine.

I don't lionize him or idolize him.  He's a kid.  Or at least, that's what liberals called teens over the years whenever teens murdered, killed, assaulted, or committed any other non-sex/race based crime.  Kid's can make mistakes.  And if he does, the press will be there like troops hitting the beaches ready to plaster his failing across the headlines.  But I wish him the best.  I thank him for exposing the storm clouds that are gathering on the borders of our nation.  The evils of our propaganda ministry.  The evils that those who cleave to the Left are prepared to endorse. It's sad that he went through what he did.  It will be sadder if sane people of good will don't do something about it.
Posted by David Griffey at 11:36 AM

Email ThisBlogThis!Share to TwitterShare to FacebookShare to Pinterest
Labels: Our Post-American Nation, The evil the Left does, The Power of Propaganda