A fine critique of the #MeToo movement 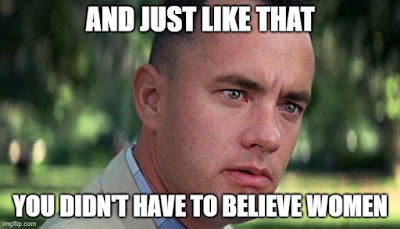 By yours truly.  For someone who says I don't like tooting my own horn, I certainly link to my own
posts now and then.  That's because sometimes an old post will suddenly get hit by a slew of visits, and on rare occasion, I must admit I'm not as embarrassed by my writing as I usually am.

Anyway, as we watch the sacred cow of #MeToo radicalism be redefined and reworked in light of it's failure to be convenient to the political Left, it was worth reading my old post again.

The context of the post was Evangelical Bible study guru Beth Moore coming out and joining the racialism of #MeToo feminism, c. 2018, whereby we learned history is pretty much mysoginists on one side, and women are assumed to be victims on the other.  #Believesurvivors and all that.  She even couched it in the more extreme version that any sex at all, no matter how consensual, can be a form of assault. No matter if the woman yelled *yes* more than Meg Ryan in a diner, it might still be assault if years later the woman looks back and regrets the encounter.

Well, thank goodness we're past that!  Tara Reade has exposed the obvious that sane people who live today can easily see: the #MeToo movement could have addressed one of many glaring problems with our Sexual Revolution era.  But it didn't.  Instead it was used and exploited purely for political gain.  What Ms. Moore's motives were for jumping on this rather Godless spin on the movement were, I can't say.  But she, like many Christian leaders, embraced it back in the day when a woman's word was gospel, and men must cower and hope the storm passes soon.

Until we find out if Ms. Reade is telling the truth or not, we'll suddenly learn about all the rights and perspectives of men that must be considered, due process and presumption of innocence to the fore, and the clear and obvious limits that come with just believing a woman's point of view because she says so.  The Beth Moore approved #MeToo will be put in the cupboard, to be brought out again when such a radical feminist spin on reality once again becomes convenient.  Convenient, that is, for the political Left.

DISCLAIMER: I did search to see if Ms. Moore has come out to defend Ms. Reade or advocate for her.  At this time, I've been unable to find any articles or posts from Beth Moore about the issue one way or another.  That doesn't mean anything.  It merely means I did look to see if she has said anything, and if so, I would gladly adjust my observations to include her perspective.
Posted by David Griffey at 9:40 AM