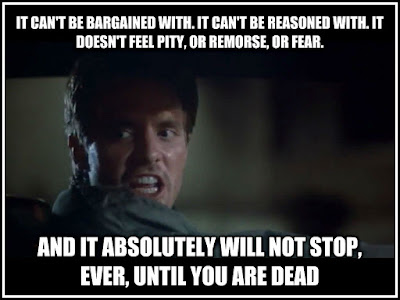 Yes kids, it's that time of year again.  So Mark banned me for the third or fourth time.  I've lost track. I seldom visit his blog anymore, unless someone sends me a link or posts a pic of a comment or piece he's written.

The last post I visited was linked by a friend who noticed Mark returning to the old 'Trump is a racist who loves and praises Nazis' meme.  Apparently, the good Deacon Steven Greydanus had affirmed the old media story about Trump praising racist Nazis because everyone at the Charlottesville protests some years ago was a racist Nazi.  An old reader who goes by 'Pete the Greek' stepped in to poopoo it with an article that broke down those who were there.  Apparently there were actually people there who repudiated the racists and white supremacists while still believing the statues of Confederates should not be destroyed.  That, of course, would call into question the idea that Trump praised Nazis, since the charge rests on each and every person at the protest being a full blown racist Nazi.

So I read the linked to article, and then commented.  It pended for a day or so and then I saw on my Disqus feed that it, and all of my posts on that article, had been removed: 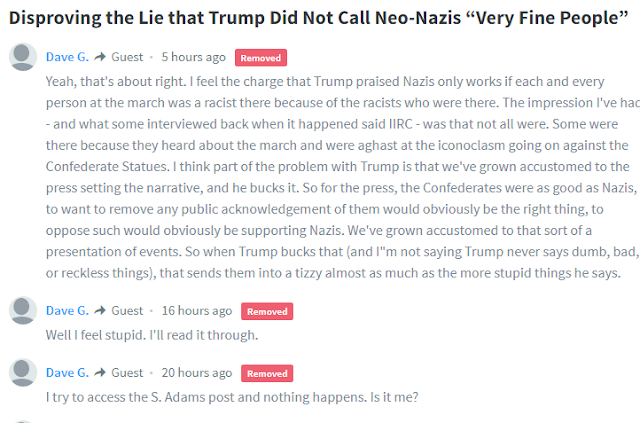 Beyond that, when I went to post on the page and ask why it was removed, I once more saw the old standby so common on Mark's media outlets:

Yep.  Once more Mark banned me.  'Pete's' posts were also removed.  I later found out he, too - a long time visitor - was banned.  Why?  Did I threaten or accuse or label or insult anyone there?  Not that I can see.  Nor did Pete.  Neither of us did what Mark says are the only reasons he'll ban someone.  So go figure.  At least he didn't fire off some false accusation against me when he did it.

Anyway, as I said, I didn't go there much anymore and almost never comment.  I find his comments section to be among the most vile I've ever seen on the Internet.  It's almost like an icon into the fifth circle of Hell.  When I did comment I tried to remain neutral on some trivial point.  It didn't matter.  We were both banned just because. So I figure at this point there's not much left to do for Mark than pray for his soul, and the souls of those who are being led astray by his works.

And pray for those who keep calling Mark a 'great Catholic apologist.'  You can insist, if you believe so, that he was a great apologist.  There's certainly a case to be made.  But at some point you have to call a spade a spade.  As one wag said about Mark, King Henry VIII once penned a great work defending the Catholic Faith.  That doesn't mean he remained a heroic defender of the Catholic Faith for the rest of his life.

If anything, the biggest threat to Mark is those Catholics who should know better who keep lifting him up, dismissing the problems as nothing other than Mark just 'getting a bit too political'.  Part of it is Mark's fault for banning so many who merely call him out, creating a tight little bubble of self-affirmation for those who visit to affirm him.  Why he does it or has spiraled down into what he's become I can't say.  But his could be a giant 'everything wrong with the Internet Age' case study.  And those who continue lifting him up, even while they see what he does and has become, are the real culprits.  They have no excuse.

As I've said a thousand times, if you reward a child for bad behavior you'll get a child who behaves badly. As much as Mark engages in myriad sins and absurd arguments to fuse his own opinions with the Gospel while allowing those who advocate endless blasphemies, heresies, intrinsic evils and sins that cry out to heaven for vengeance to have a blank check on his social media outlets, it's hard to say much when he keeps being rewarded and even praised for doing the same.

GRUMPY UPDATE: It came to my attention that I didn't include a link to the offending post.  No, I didn't.  I would no more include a link to that blog than any blog advocating falsehoods and calumny, hatred of those things and people I hold dear, blaspheme, heresy, or any grave and intrinsic evil.  That blog, and especially the horrendous comments section, does that almost as a matter of course.  When I visit, I only do so when someone provides the means to bypass Mark's blog link so I don't give it any visits.  When I bother, I access the comments through Disqus.  I do not go there if humanly possible, and I will never link to it on this blog again.  If the Devil had a street address, I wouldn't tell people how to visit him.  I'll do the same in this case.
Posted by David Griffey at 6:04 AM

Email ThisBlogThis!Share to TwitterShare to FacebookShare to Pinterest
Labels: Catholic blogging, Catholics and the Internet, Other Blogs