How I know Trump is not the next Hitler 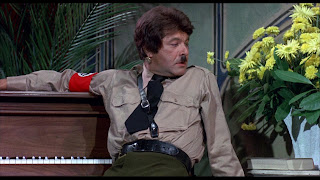 HT to my boys for pointing this out.  Of course the Left/Pop Culture/Press has all but canonized the idea that Trump is Hitler incarnate, he's a racist, fascist, sexist Nazi, White Supremacist, and molester of teddy bears.  Therefore, all bets are off and any evil thing can be done or endorsed for the greater good of saving the world from its impending doom at the hands of this new super Fuehrer.

But that's not how it will be.   My boys pointed out, when having one of our family prayer time jam sessions we have in which the conversation train weaves in and out of many streams of consciousness, that Hitler was an angry, troubled individual who had life crap on him more than once.  An abusive father, near fatal war injuries, disappointment with his life.  And all in an area of Europe soaked in radical nationalism and antisemitism.  Hence Hitler.  A man who seized upon the worst of the trends and fads of the day, and fell into the easiest mega-narratives around: the superiority of the German people and the inferiority of those who prevented the Germans from obtaining their rightful place as head of the class.

To that end, the next American Hitler will not be like Trump, however insincere or sincere you think his love of God or Country happens to be.  Those are not the mega-narratives and fads of today.  Those are swimming against the fads.  The fads our nation is steeped in are belief in the unparalleled evil of the Christian West and the American Experiment.  The innate racist evil of all white Europeans and Americans.  The inherent sexism of  history at the hands of oppressive misogynist men.  The terrors visited on the world by heterosexual bigotry and oppression of free sexual experience.  And the dogmatic belief that we are the pinnacle of human evolution, the top, the Tower of Pisa, and the only reason we're not single-handidly  saving the planet is those wretched evil types clinging to their guns, religion and apple pie.

So the next Hitler, if Hitler is to be repeated, will not be someone, however insincerely you may think, running about waving the flag and calling churches essential.  Any more than the last Hitler emerged with strong questions about German superiority or nationalist fervor, while reaching out to Jews and other minorities with friendship and tolerance.  The next Hitler will be an angry youth or adult who embraces the uber-fads and narratives of the day that are already deep in our societal bloodstream.  And those include a desire to end the 2500 year march of horrible Western Civilization and throw down the founding principles of this racist, genocidal slave owning nation built by reprehensible racist reprobates.  And, of course, eliminating those who embody these things and refuse to repent of their blood-guilt in all the sins of the Western past.

Or so my boys speculated.  I think they're on to something.
Posted by David Griffey at 7:51 AM

Email ThisBlogThis!Share to TwitterShare to FacebookShare to Pinterest
Labels: Interesting Insights, Musings, the Boys, The Decline and Fall of the American Dream