Signing off a week from now

So next week, a week from today, is when the ol'blog will be folding up, at least as it has been.  I've said I won't abandon the blog altogether, or at least that's not the plan.  I simply will go in a different direction.  I have no particular hobby or interest that will dominate.  It will likely be a place for me to just post this or that, a family picture here, a thought on some spiritual or religious thing there.   Nor do I want to say it will avoid any issue in the world.  If you begin reflecting on religion or other aspects of life, it's impossible to do so and not take into account where we are in the world and how we got here.  I might dwell more on the history or the biblical, as those are areas I've studied and taught on over the years.  A sort of online, public domain dairy or journal, if that.


My point is that it will no longer  be the topical blog in the sense of 'look at this latest news story or this blog post, where it is good, bad, right and wrong' and linking it to this or that hot button topic of the day.   Oddly enough, that was never the intention when I started the thing.  It just sort of became that over the years.

Oh, and the date of November 5 is cosmic coincidence.  It's not to honor Guy Fawkes!  It's because last year I said I would drop it on that particular day after much musing on what had befallen our world and nation up to that point.  Remember, that was shortly after the Kavanaugh hearings, when we saw a naked assault on almost everything we have come to assume is good and right in the world.  It was in the wake of that disaster that we heard more and more people saying down with due process, presumption of innocence, even democracy.  Within a six month period, almost the entire universe as we came to understand through endless centuries of Christian civilization it was thrown out the window, everything good now bad, everything evil and bad now a virtue.  And it was all tied with new forms of racism, bigotry, sexism, and growing calls for new extermination of those deemed unworthy of the latest modernist Reich. 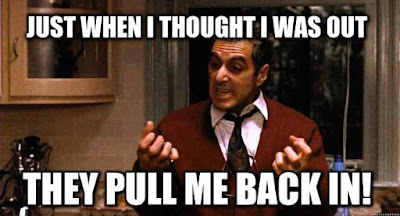 In light of that, I realized things had gone well beyond what this little blog could do.  So I planned on quitting, but then crazy begat crazy, as I said here, and I ended up being pulled back in.  I will not do that again.  I will post about this or that, and it may touch on the evolution of evil that we've seen, or musing about the future, or seeing the faith or the Western tradition in light of new hostile interpretations of history and morality.  But it won't be driven by this or that latest blog piece or news article.

So next Monday, I will begin blocking various sites to keep me from the temptation of going back.  I know, I know.  As administrator I can unblock them.  But thankfully the blocking app is a pain in the neck, and I'll likely not go through the hassle to unblock once I block.  Patheos - the entire site - will be the first to go.  I realize there are some good blogs there, but the site as a whole is hostile to the Christian Western tradition, orthodox Christian faith, and an advocate for much that is increasingly evil and hostile in the world.  I think until Christians wake up and realize there is a time to stop the 'let's all get along' approach, the Christian faith will continue to post losing numbers.

Others sites will go as well.  Mostly individual blogs, twitter accounts, and on and on.  I don't have twitter, but for reasons I don't understand I can access twitter, at least to see it.  Therefore I'll be blocking them.  I may keep Dreher's site up (simply because I think he is onto something with his The Benedict Option, even if he isn't the best messenger for the message), and I know I'll keep up The American Catholic, a good resource for everything from whimsy to history and culture to the important lesson that one does not need to hate America to be a Catholic in good standing.

Beginning the 6th of November, if I blog at all, it will be based on whatever made me think on that particular day.  It will be more reflection-like, rather than political or social issue driven.  Or it might just be pictures of the latest family outing or festivity, or a lament for the Cleveland Browns.  Or, it may be a while with nothing at all.

I certainly appreciate those who have stopped by over the years and kept the visiting numbers up, and hope you'll swing by to see if I'm up to anything.  Unless there is a 9/11 style event, however, I'll keep it simple and keep it personal.
Posted by David Griffey at 6:30 AM