A nice tribute to Columbus on Columbus Day

Courtesy of The American Catholic.  At this point we realize that the Left has made an unholy alliance with any people group or culture that will help destroy the Christian West and the American Experiment.

To that end it will celebrate anything and anyone if it will tear down its enemy.   Therefore appeals to such ideas as rejecting Indigenous Peoples Day due to morally questionable practices on the part of American Indians will fall on deaf ears.  The Left doesn't care if someone tortured or enslaved or practiced human sacrifice.   It is completely prepared to give a justification or defense if need be.  It only cares insofar as it can use such things to tear down the civilization the Church built, as well as the Church along with  it.

So any desire to sit and rationally discuss why Columbus Day is an appropriate celebration or that we don't want to credit native Americans too broadly will be met with blank stares.  That's not the point.  The Left firmly believes that everything to do with the Western Tradition is bad and must go, including such self-evident truths as the importance of liberty, freedom and the dignity of the human person.   In fact, it doesn't seem to care about people at all, unless their suffering or plight can aid its agendas.

So for those who get it, the link is a nice remembrance of not only why we celebrate this day, but why we had best start striving to reclaim that which the Left seeks to destroy.  After all, the Left isn't going to stop until it gets its job done, nor should we.

UPDATE: Meanwhile, Google continues it's 'We'd rather celebrate snails than anything from America or the Christian West' mantra, by posting this: 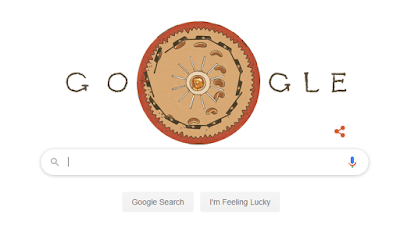 A tribute to the very interestingly fun fact about where a certain strain of optical illusions come from.  But not Columbus.  Anything but Columbus.   Again, the Christian Faith, the Christian West and the American Experiment are the enemy to be destroyed.  We had best admit that, or our posterity is going to pay an awful price.
Posted by David Griffey at 9:39 AM

Email ThisBlogThis!Share to TwitterShare to FacebookShare to Pinterest
Labels: Anti-Americanism, History, Post Westernism, What We Learn from History