It's funny.  Like mainline Protestant denominations, progressive Catholics lean heavily on the 'Development of Doctrine'.  That is a very Christian, and biblical, understanding of God's unfolding relationship with mankind.  Simply put, God didn't reveal everything at once.  He revealed a little and a little and a little over the ages.  The ultimate revelation being God incarnate in Jesus Christ.

Now, Jesus is the final true revelation, but that's not to say the Christian Faith never accepted new ideas or new understandings.  From the beginning, Church leaders realized a need to confront the context of the ages and even examine the historical Faith to see ways in which God interacts with new discoveries and ways of seeing the world.

What happened, at least in Protestant denominations, is that this very Christian concept became a blank check to basically throw anything and everything out the window to keep up with the latest Joneses.  Not only did it require a blind acceptance of the infallibility of progress, but it also tended toward a growing arrogance, a presentism as dogma in which many in these denominations severed almost all ties with the past, owing to their contempt for everyone who came before.  If they saw farther than those before, it's because they were the towering giants, looking back with increasing contempt on those deplorable dwarfs who came before.

Well, that seems to be where Fr. Martin is headed: 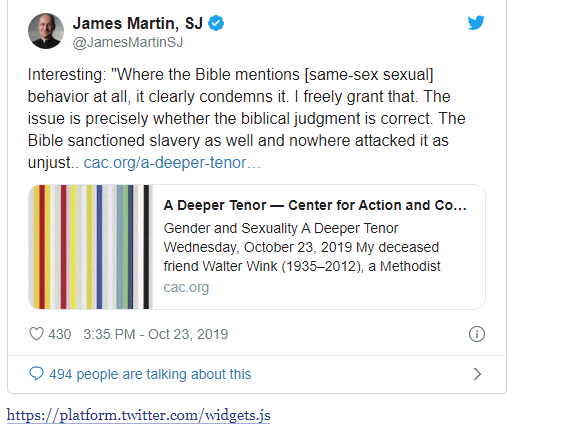 So there you have it, the Bible is just wrong sometimes.  Makes you wonder how valuable it really is.  Yes, yes.  Fr. Martin didn't say he agreed. He just found it - interesting.

Increasingly, it seems as if Catholic leaders - not to mention Catholics in general - are embracing the same notion:  Oh sure, there was a time when the Church OK'd the death penalty, or taught that women can't be priests, or the silly old Bible writers loved them some slavery and homophobia, but praise be to God!  The Lord finally got off the pot and created the first Generation to set it right!

Same thing I saw in Protestantism.  Like all things today, it's happening at a faster pace.  Just like new forms of racism.  What took centuries to lead to Jim Crow, or millennia to arrive at Auschwitz, has emerged almost overnight to the point where people can, with a straight face, say the whole of white heritage must be exterminated.  So Catholics, unlike Protestants who took decades, or generations, to come to something like this, are within a matter of decades pushing the Church in all but its skeletal structure to the same brink.

FWIW, Rod Dreher notices many legit problems with Fr. Martin's take, but it is the same that we see with all of the Left.  To embrace the manifold heresies and blasphemies that characterize that thing called the Left (or SJW, or secular paganism), one must peddle in lies, idiocy, BS, and outright apostasy.  So far, despite the loud boast that the Catholic Church alone can save us from the degrading slavery of being a child of the age, it seems like a growing number of Catholics are equal to the task nonetheless.

As my boys said, it looks like we were pretty stupid to have given up everything to become Catholic, when the Catholic Church is doing everything in its power to become like the world.  We could have just become liberal Protestants and met the Church halfway and not lost almost everything we had.

The reader on Rod's blog gets it and gets it good - the abyss into which the Catholic Church is rushing by leaps and bounds:


“Where the Bible mentions murder at all, it clearly condemns it. I freely grant that. The issue is precisely whether the biblical judgment is correct.”

“Where the Bible mentions adultery at all, it clearly condemns it. I freely grant that. The issue is precisely whether the biblical judgment is correct.”

“Where the Bible mentions exploiting the poor at all, it clearly condemns it. I freely grant that. The issue is precisely whether the biblical judgment is correct.”