A fun Halloween reflection on the sacred and the secular

From an unlikely source.  I stumbled on this blog years ago.  It was a blog post celebrating JRR Tolkien.  After that, I read several posts and realized it was mostly a blog about RPGs, Dungeons and Dragons and similar.  I would go back and sometimes he would have an interesting piece outside of the 'Inside RPG Baseball' stuff.  It looks like the blog is now defunct, though it's up for perusing old blog posts.

This one always struck me.  He's dealing more with artwork in various eras of Role Playing Games.  My guess is that he's no fan of recent versions.  My boys, who are into the RPG/Fantasy/Sci-Fi world keep me up with the latest of that culture, and it seems there is always a debate over the best and worst of the latest.

Anyway, he's comparing two pieces of artwork, but featuring the same monster, a demon named Orcus.  He contrasts two pictures, one from decades ago that appears almost amateurish, and one modern piece that seems right at home in our modern CGI laden world of CGI movies and PC games: 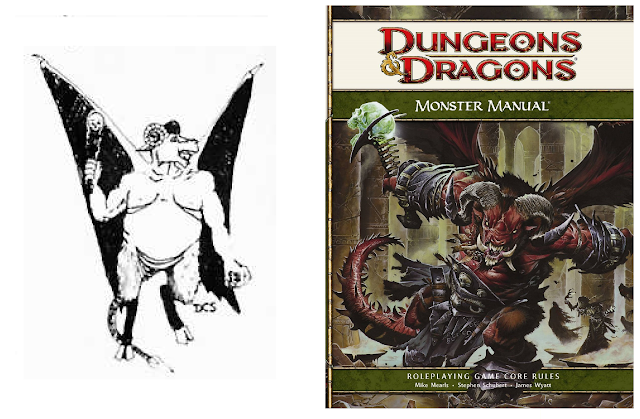 He explains his preferences and why he prefers the older, less refined version (some of it likely being a preference for older things in general - but that's an assumption on my part).  He spends much time discussing the overall evolution of art in the hobby, as well as other tidbits.

Then he comes to the point that grabbed my attention.  In unpacking the differences, he writes this:


Now, I'm not trying to suggest in the slightest that the Sutherland Orcus is a careful product of someone with a deep understanding of the medieval mind, because that'd be laughable. However, the Sutherland drawing, like most of the drawings in the original Monster Manual, is broadly consonant with medieval esthetics. Or perhaps I should say that it calls them to mind. There's something weirdly primal about that goofy Orcus DCS drew. I've always found medieval demonic images to be far creepier than modern ones, precisely because they have some atavistic connection to aspects of my cultural memory. Modern demons are just imaginary creatures; they're not monsters, if you catch my meaning. Wayne Reynolds' Orcus isn't a demon. Look at how muscular and physically powerful he is. That's a creature that inspires fear for my life, whereas Sutherland's Orcus is one that inspires fear for my soul.

You get that?  Beyond a fairly accurate take on how the medieval mind processed imagery in terms of the natural and demonic, he also 'gets' the difference between the sacred and the secular.

We live in an atheist age.  Atheism had its Great Awakening at some point between the mid 19th and mid 20th centuries.  At some moment, atheism won the mind, and in some cases the heart, of a growing number of citizens of the old Western world.  It's been evangelizing the lost around the world since.

But with this comes a very material, physical, and IMHO shallow, grasp of things.  What does the secularist fear?  Physical pain, physical threats, physical death. What does the secularist crave?  Ultimately some form of physical pleasure since, to the secularist, everything is somehow physical or material anyway.  That second, newer painting speaks to that.  It's a buff, beat'em up type of monster that would feature in so many horror movies or Marvel films today.  Whatever it can do, it stops dead at anything beyond this physical universe.  Even the ability to destroy all life in the universe stops at all life.  There is nothing else to fear because, for the secularist, there is nothing else.

But as believers, we connect to that first old, silly drawing.  We know - or should know, if the doubts and assaults on the Christian World haven't taken their toll - that beyond this physical world is an entire part of existence that we must jealously guard, for the loss of that means the loss of everything, not just the small speck of time in which we live in this paltry material universe.

I thought of this old piece when I watched the strange events of the Amazon Synod, the confusion, and the statue that nobody seems to agree about, unfold.  In short, most defending Pope Francis, the synod, and the place of precedence for that female statue have emphasized the purpose of the synod, to reach out to the peoples of the Amazon regions, to find ways to increase access to the sacraments, to more or less apologize for the Western destruction of their ancient cultures (with no real call out to anything bad in their cultures), and of course an emphasis on the environment and ecological priorities.  All of these might be fine, but atheists - with the exception of the Sacraments - might sound no different in terms of priorities.

Somehow, the whole idea that possibly worshiping a pagan idol or 'Mother Earth' is no big deal, 'it's the environment stupid!' sounds much more modern, more material, and more like the monster in the second picture.  The problems Catholic and Christian leaders address today are big, bad and mostly physical - Global Warming, immigration, economy, sexual assault, racism and the like.  The idea of a pagan idol or pantheistic veneration of the world only matters if, well, you believe it.  Otherwise they're just material people in a material world doing material things - which is why material crises and material solutions are the focus.

I wonder if the world's Christian leaders were sitting around the table, rolling up the strange shaped dice we associate with RPGs, and getting ready to sally forth, just which of the two monsters would scare them the most. For the worst hysterics ginned up by Global Warming activists, for instance, might inspire fear for our lives, but as people of faith our main priorities should always be those dangers that are dangers because first and foremost they are threats to our souls.  And yet it's mostly those physical life saving issues our leaders are focusing on, often to the detriment of our soul saving fears.

Just a little pondering things as we get ready to wade through the torrents of yet another washed out Tricks or Treats.  Boo! 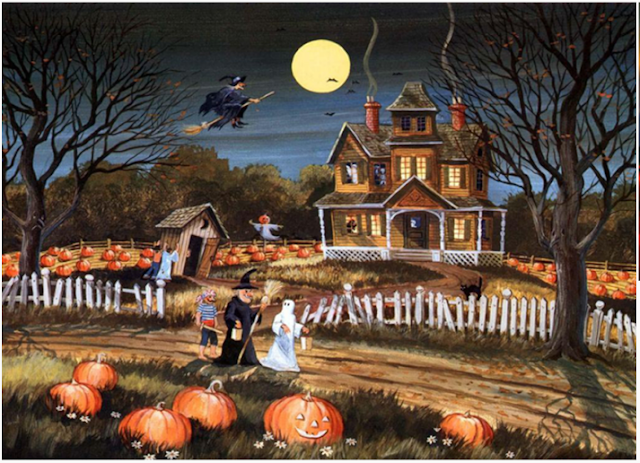