More prayers for the Sri Lankan victims of Muslim radicals

I thought I would add this.  I thought of them mightily, my brothers and sisters in Christ who died for their faith.  I thought I would point out that they were killed by Muslim radicals.  Hardly a unique occurrence.  It doesn't mean all Muslims are terrorists.  It means that there is a constant ebb of Muslims who are hellbent on killing, among others, Christians.  Just as there are various groups in the world hellbent on killing other groups.  And yet after watching a half dozen news broadcasts covering the killings, the words Muslim/Islamic were only mentioned a combined total of three times. 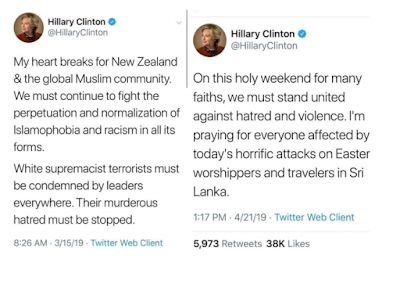 Satan laughs, Jesus weeps.  Prayer for this soul who has turned her back on the sanctity of life and mocks God by thinking we, much less the Almighty, do not see what she has done and why she has done it.

One of the greatest evils of our time is the idea that human suffering and misery is only important if we can exploit it to attack our ideological opponents.  It takes 'doing it to the least of these' to new levels of low.  The only thing sadder is just how many who would follow Christ have completely devoted themselves to this dehumanizing tactic.

Email ThisBlogThis!Share to TwitterShare to FacebookShare to Pinterest
Labels: Islam and the West, The evil the Left does