So yesterday, heading into late April, we woke up to this: 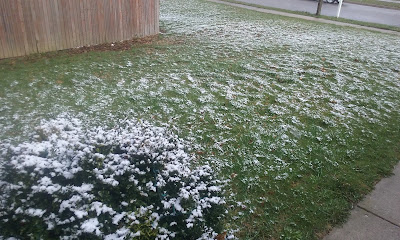 Why does this remind me of the 90s when we were going after smoking?  Remember that?  Back then it seemed every day research found that smoking was the cause of - everything.  Every other day the news reported that smoking caused lung problems, heart problems, cognitive problems, emotional problems, losing your car keys, the fall of the Roman Empire, bad TV sitcoms.  Smoking caused everything!

That's what I think about now.  I haven't heard news about smoking causing tensions in the Korean Peninsula in years, but suddenly all the latest research shows that everything is the result of Global Warming.  Apparently that includes record freezes.  That is, of course, when weather proves something.  Sometimes what is going on outside of my window is merely weather and proves nothing.  Sometimes apparently it's proof of something to do with climate and proves everything.  But in all things, the important point is that everything proves Global Warming.

Since science is never wrong, and the majority consensus is always right, it must be true!

BTW, it's worth noting that in Central Ohio, the latest measurable snowfall was well into May.  And that was back in the early 1920s.  Apparently that would also prove Global Warming.  It would have to, if you think on it.
Posted by David Griffey at 7:03 AM